The Uncanny Power of Words 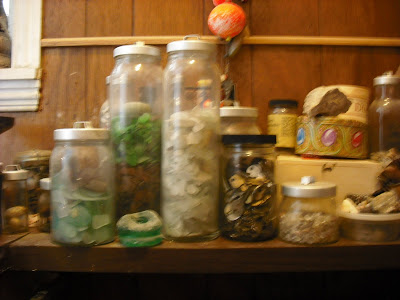 .
Too often, we forget the extraordinary power that words have over human beings. They can start wars and revolutions, send young men off to the gold fields, lend courage to the dying, solace a broken heart. And on a lesser level...

"Driftglass," I said. "You know all the Coca-Cola bottles and cut-crystal punch bowls and industrial silicon slag that goes into the sea?"

"I know the Coca-Cola bottles."

"They break, and the tide pulls the pieces back and forth over the sandy bottom, wearing the edges, changing their shape. Sometimes chemicals in the glass react with chemicals in the ocean to change the color. Sometimes veins work their way through in patterns like snowflakes, regular and geometric; others, irregular and angled like coral. When the pieces dry, they're milky. Put them in water and they become transparent again."

Forty years ago, this passage told me to pick up pieces of driftglass (or, as the stuff is called on the Jersey Shore, beach glass) whenever I was at the beach. I've been doing it -- as has Marianne, starting a year or two later -- ever since. Pictured above are some of the results; jars of driftglass, and other things as well... tiny driftbricks, Cape May diamonds, lost keys, you name it.

Mind you, the story didn't tell me to collect driftglass. In the story, collecting driftglass is a sad, useless thing that a sad, crippled man does. But the passage told me. And I obeyed.

That's the uncanny power words have over us.

The Poem du Jour has been updated.

I first read that story roughly in the same time frame (40 years ago). I then came across it in a collection called "Survival Printout" which also had an excerpt of an essay by Loren Eisley, "The Star Thrower". They make a very nice pair of readings.

I have also collected driftglass (Jersey shore as a start!), but my collection is no where near as extensive as that.

For me, it's THE EINSTEIN INTERSECTION. A book that spun my head around and changed how I looked at the art of writing. Though BABEL-17 came close. And, come to think, EMPIRE STAR...

Michael Swanwick’s post about the power of words has gotten me re-reading Samuel R. Delany’s short stories. Which goes to prove his point.