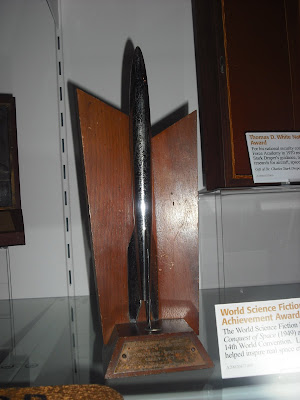 About two weeks ago, an observer at the Catalina Sky Survey spotted a small meteor (c. 1 meter in diameter) headed straight toward Earth. The astronomical community was alerted and about 570 observations were made by 27 observers over the next nineteen hours. It exploded about 35 kilometers over northern Sudan with a force of about one kiloton.

2008 TC3 was the first meteoroid ever spotted before it reached Earth's atmosphere. On average, a meteoroid of its size hits our planet once a week. If one were to explode over New York City or Moscow, the military would have sophisticated enough technology to recognize it for a natural event, rather than enemy attack. Not all nations with nuclear weapons could do so.

Apophis is a medium-sized (c. 270 meters in diameter) asteroid which in 2029 will pass between the Earth and the Moon -- and a lot closer to the Earth than to the Moon. It will be closer to us than our geosynchronous satellites. Luckily, its orbit is out of the plane of our satellites so it won't disrupt them. Even more luckily, it won't hit our planet.

If Apophis did hit our planet, it would not cause a worldwide extinction event on the order of that which killed off the dinosaurs 65 million years ago. That would take a rock a kilometer in diameter or larger. It's estimated that we've cataloged roughly 90% of the Near Earth Asteroids of that size and none of them are poise any threat to us anytime in the foreseeable future.

However, a 340-meter asteroid like Apophis could cause enormous regional damage. Nobody really knows how much. Mark Boslough of Sandia Laboratory, however, calculates that the Tunguska Event may have been caused by a meteor as small as forty meters in diameter.

The American Congress recently mandated NASA to survey 90% of all Near Earth Objects of 240 meters in diameter or larger by the year 2020. Since NASA has twenty billion dollars of mandates and a seventeen billion dollar budget, this doesn't look likely to happen. They're working on it, but piggybacking the search on other sky scans.

There are a number of potential ways to deflect an asteroid or comet (you don't want to blow it up, because the chunks would still hit the Earth, with minimally diminished destructive force), some of which use off-the-shelf technology. Given an early enough warning and a few years' lead time, it could certainly be done.

Nobody has the responsibility to do so.

Under current protocols, if a large rock were headed toward the Earth, scientists would quickly identify it and report it. Follow-up analysis would be run to determine if it were an impactor. If it turned out to be one, the scientific community would perform more observations to update the orbit and publish those findings. This would continue in a cycle for as long as the object was on its way.

If the impactor was a serious threat to the planet, it is presumed that somebody would do something. Who that somebody is, though, and which of several options they would take, nobody knows.

All in all, a pretty nifty symposium.

. . . Willey Ley's Hugo. After the symposium, Marianne and I went to the Udvar-Hazy Center at Dulles International. The center is an overflow facility for the Smithsonian's Air and Space Museum, and it's essentially a big hangar with lots of planes and spacecraft: A space shuttle, the Enola Gay, a couple of MiGs, and so.

Plus Willey Ley's Hugo. In a display case with other historically significant tchotchkes. Pretty damn cool.

Poem du Jour has been updated.