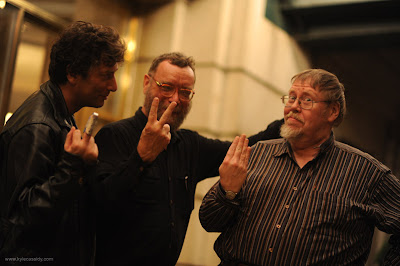 [above, l-r: Neil with broken finger, me, Gardner Dozois; photo by Kyle Cassidy]

Neil Gaiman breezed through town last night, bringing autumn in his wake, as by a special arrangement with the Seasonal Powers he does every year. He appeared at the Gershman Y to promote his newest work, The Graveyard Book. I was on my usual rounds, walking up and down the earth, and noticed an hour beforehand a line a block long waiting patiently in the rain. So, yeah, the man is a rock star.

Neil is so popular, in fact, that the crowds showing up for signings have gotten large enough to make such events physically painful for him. (In Brazil, 2000 people showed up for a signing, and he signed from four in the afternoon until two in the morning. His arm swelled up to twice its normal size and had to be iced down afterwards. Nobody should have to go through that.)

So on this tour, he's trying something different. Rather than him doing autographs, there's a table of pre-signed books for sale. To make up for that lack of human contact, he first reads an entire chapter of his book, a different chapter at each stop, in order, and each reading recorded on video and then put up on the Web, so that by the end of the tour you can see and hear him read the entire thing, if you wish. (I think a lot of people will.) Then there's an intermission, during which the trailer for the film version of Coraline is shown, and somewhere backstage Neil sorts through questions members of the audience have written on 3 by 5 cards. And finally he comes back and answers as many of those questions as he can in the time allotted him.

How did it work out in practice? Pretty damn brilliantly. It will surprise no one that he's a first-rate reader but -- trust me on this -- it's a lot harder than it looks. And he had the audience. They laughed at all the right places, they were tense at all the scary places. They were rapt. You can find the link for the video at Neil's blog.

As for the question-answering . . . I can't say Neil has the timing of a stand-up comedian, because that's not what he was doing. He was being more of a stand-up witty-and-charming-and-not-at-all-stuck-up-or-pretentious-ian. And, oh man, the audience ate it up. I was there with three young friends and they were perfectly satisfied with the experience.

Afterwards, Neil went out to dinner with a few of his pals, myself included. He said that for him the best part was answering the questions, because he never knew what was going to be asked, which made the experience fresh and interesting for him every time. So if anybody's wondering what he's really like, after the show's over . . . Well, he's pretty much the same as the guy you see on stage. You'd like him.

I've updated Poem du Jour with another Billy Collins poem and one by Czeslaw Milosz I covered on learning that he had died.

The online chapter readings and blogging is a brilliant way of keeping us in touch with Neil's tour and yes, I feel like a rock fan!

I'm hoping I will have heard him read the whole book online by the time he gets to the London School of Economics on 31st Oct!
Perhaps the book-signing robot could ease the pressure?
http://www.longpen.com/
But nothing could replace Neil, obviously.

Okay, so I have an odd question. I saw you, and Gardner Dozois, and Tom Purdom, in the audience at the reading. I really wanted to say something about how much I admire what I've read of your work, but decided against it.

Anyway, the question: How do you feel about being approached at random by a fan of your work? Obviously, at a con or signing, it's different; it's expected. But when you're out on the street--is it just an annoyance?

Hi! I found a link to your blog on Neil Gaimans blog, and i just feel like being polite and ask if you mind me following it?

'twas a great meal, and the conversation never better.
glad to meet you and Gardner both, MIchael, you added spice to the stop in the city of brotherly love.
xo Kitty Cat (Neil's assistant)

Wow! A lot to respond to today.

Sue: I am absolutely sure that Neil wouldn't employ a mechanical device of any sort to sign his books for him. Autographs are a bit of magic, like a penny pitched into a wishing well. It's not the thing itself people want, but that sense of connection. (I recall how I felt, reading a Hogarth Press chapbook of Hope Mirrlees's "Paris: A Poem," and seeing the corrections made in hand by Virginia Woolf. It was a numenous moment.) I feel very strongly about giving the reader what s/he wants, and I know Neil feels exactly the same way.

It's a kind thought, though.

Matt: For most of us, it happens so rarely that's it's no problem at all. A little strange at the time but in retrospect usually pleasant. For someone like Neil, who's flirting with broad public recognizability, it would likely be a kindness not to approach him.

I'll pass along your kind words to Tom, who will be gruffly pleased, and to Gardner who will doubtless say something self-mocking.

Rebecca: This is a public blog, and you're perfectly welcome here anytime. I appreciate your politeness, not because you needed to ask, but because politeness is always a welcome thing.

Kitty: Yes, that was a fun conversation, and it lasted until poor Neil was ready to collapse from exhaustion. But we're all alike in that one regard, I think -- when the words are flowing, we'll keep in the conversation for as long as we can stay on our feet.

Best luck with the rest of the tour! May it be as pleasant for you as Neil's visit was for Gardner, me, Kyle, and the rest.

Michael,
Thanks so much for your reply. It wasn't a serious suggestion, just an attempt to connect with you and empathize with Neil!

You're right, the magic is in being there.