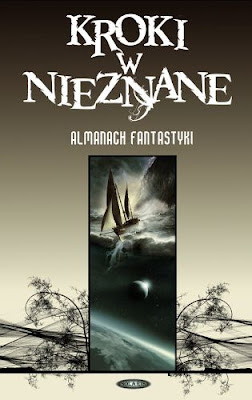 .
Writers are slaves of the mailbox.  Back in the day, I used to drop in on Gardner Dozois and Susan Casper fairly regularly, and sooner or later Gardner would always start for the door, saying, "I wonder if the mail has arrived yet."
"Gardner, we've got a guest!" Susan would say.  "Who cares whether the mail has come yet or not?  It'll keep."
Then Susan published her her first story, and for years Gardner never managed to make it to the mailbox first.
All of which is to explain why I felt so astonished to drop by my mailbox this morning and find a slip marked "final notice."  It turns out that the post office has been holding my contributor's copy of Kroki w Nieznane ("Steps into the Unknown" or possibly "Voyages into the Unknown"), a handsome anthology of fantastika containing my own "Wild Minds," for a long, lone time.  Apparently, it's been lingering in the back roome while I failed to claim it because the p.o. folks never put any notices in my box.
This may be why my copies of Science Fiction World haven't arrived yet.
Nevertheless,  Kroki w Nieznane has a terrific lineup.  In addition to my own moodly little meditation on what it means to be Catholic, there are stories by the usual suspects (James Patrick Kelly, Carol Emshwiller, Jeffrey Ford, etc., etc.) and worthy writers from further afield (Claude Lalumiere and Johanna Sinisalo) as well as two I'm totally unfamiliar with (Jose Antonio Cotrina, Maria Galina)  It's always a pleasure to find concrete evidence of science fiction literature outside of the Anglophone nations, and doubly so to find evidence of adventurous editors out there.
So Where Have I Been?
You may have noticed that I was away from my desk, traveling these past few days.  I'm still a little worn from the journey, so for the moment I'll only tell you that Marianne's favorite Baptist minister, Pastor Marcia, was appalled I was going to be doing this, and Sean's favorite retired high school English teacher, Mary Schroeder, was outraged.  My former-hippie-chick friend in Seattle, Leslie, on the other hand, assumed the best and approved entirely.
I'll tell you all on Friday.
And of Course . . .
Tuesday's Poem du Jour was by Anne Sexton.  Suicidal, yes.  But one hell of a great poet.
*
Posted by Michael Swanwick at 7:10 AM

Dud url on the poetry blog - you want http://poemdujour.blogspot.com/ (blogspot, not blogger).

Thanks for the poetry blog btw - it's come along at the right time: I'm partway through Stephen Fry's delightful "The Ode Less Travelled", and still feeling motivated by a Jeanette Winterson interview I heard where she said she memorizes a poem a week.

On to A.E. Houseman: when I think of him I think of "Epitath on an Army of Mercenaries". My Dad thinks of "A Shropshire Lad". But keen readers of the (wonderful but poorly titled) Chatto Book of Nonsense Poetry would think of:

'Hallelujah!' was the only observation
That escaped Lieutenant-Colonel Mary Jane,
When she tumbled off the platform in the station,
And was cut in little pieces by the train.

Mary Jane, the train is through yer:
Hallelujah, Hallelujah!
We will gather up the fragments that remain.

"Epitaph on an Army of Mercenaries" is probably the kindest thing ever written about that profession.

I can definitely see the influence of poetry on Jeanette Winterson. If she didn't read enormous gobs of it, her prose wouldn't be half as good as it is. Speaking purely for myself, I go to poetry to learn the possibilities of language -- how clean it can be, how concise, how unexpected. If you can touch it however lightly without snatching away your fingers, scorched, then it's not the pure quill, is it?

> "Epitaph on an Army of Mercenaries" is probably the kindest thing ever written about that profession.

It's a wonder I've never found it in the frontspiece of a Baen book. It would be a nice change from Kipling.

> If you can touch it however lightly without snatching away your fingers, scorched, then it's not the pure quill, is it?

For me, good poetry (and to be fair, "good bad" poetry) quite literally makes the hair on my arms stand on end. I have often wondered how less hirsute people can tell good poetry from bad.