My Career as a Chinese Columnist 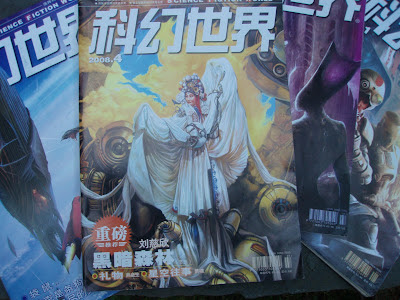 .
Have I ever mentioned that I'm a Chinese columnist?
Absolutely true.  I have a monthly column in Science Fiction World, published in Chengdu.  It has the largest readership of any SF magazine in the world.
So how did this happen?  My last night in Chengdu, editor Jenny Bai suggested I write a column on writing advice for the magazine.  I wasn't warm to the idea -- it didn't play to my strengths.  But Jenny said, "I think you should think about it."  So I did.
(Later I found out that Rob Sawyer, who was also a guest at the convention, had once written a series of columns on writing SF and re-sold them to SFW.  They'd been wildly popular, but they'd come to an end.  So that's what put the idea in Ms Bai's mind.)
Back home, I suddenly thought:  Nancy Kress!  For sixteen years she wrote the "On Fiction" column for Writers Digest.  Nobody knows more about how to write or can explain it more lucidly than she can.  So I checked to see if it was all right with her, and then wrote Jenny Bai, explaining that Nancy would be a much better choice for the column than me.
Jenny wrote back, thanking me for the suggestion, which she took.  Then she wrote, "But I think you should write a column on other aspects of science fiction for us."
I don't recall that I ever actually said yes.  But I have Chinese relatives and in my experience, if a Chinese woman wants something, sooner or later she's going to get it.
*
Posted by Michael Swanwick at 4:48 AM

Well, I knew you were a Lefty, but I never suspected you were a Chinese Red, and maybe even a Marxist-Leninist. And don't you think that publicly admitting it in this current climate of jingoism might — wait, what?. Oh, "columnist". Never mind.

Any chance of sweet talking the eds of SFW into letting you post your column in both English and Chinese on a blog? That's OK... I didn't think so. *sniff*

Mostly, the columns explain the workings of the non-Chinese science fiction world to people who haven't been exposed to it before. Things like how the Hugo Award is voted on and awarded. (One quite intelligent person I spoke with in Chengdu was surprised to learn that the membership fee for the Worldcon lasted only one year, rather than being permanent.) So there's not going to be terribly much interest in the English version of the columns.

But maybe I could scan the Chinese versions and post pdf files of them. I'll ask Jenny Bai for permission to do so just as soon as I've figured out how to work my scanner.

Cool! I wish I had more time to spend on this kind of thing, but it is fun to see how stuff is produced and received on "the other side" so to speak...