Another Hippie Tool of the Military-Industrial Complex. 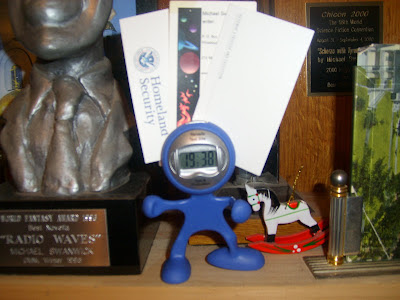 Chertoff arrived fashionably late.  He'd been held up at the White House, leaving an underling to vamp for time before an audience of defense contractors and DHS bureaucrats.  It might sound sycophantic to relate what a great boss he was, the flunky said, but by golly, it was true . . .
Finally, the head of Homeland Security strode onstage, clutching a cardboard cup of Starbucks.  He looked like an aging and dissolute elf.  He hit his mark and delivered a well-polished set of platitudes about the stunning accomplishments of the previous year.  Then, while the same put-upon underling explained that there was no time for questions, he steered his cup of coffee offstage, away to unimaginably important business elsewhere.
It was clear that Michael Chertoff was unique among Americans in being perfectly contented with the job he had done as the Secretary of Homeland Security.

So what the hell was I doing at DHS conference?
The short answer is that I belong to Sigma, a science fiction think tank created by Arlen Andrews to advise government agencies pro bono when they have a need for some basic futurism.  We were invited to put on a panel in DC and I went.
The more involved answer is that I'm engaging with our times and our culture.  I'm not happy with what the post-9/11 gang have done to my country, and so I'm doing my minuscule bit to try to change things.  Right now, it seems clear to me, everybody in the government is so task-oriented, so focused on their "missions" that they're completely blind to overall goals.  Recently I met a mid-level bureaucrat (not, to be fair, in the DHS) who thought it would be a great thing if every packet of information on the Internet could be watermarked so that the government could keep track of everything posted online.
When I said that this would be a massive violation of privacy, he assured me that young people no longer valued privacy anyway.
So I was out there, thumping the Bible, telling whoever would listen that they should not be preparing the way for yet more defeats but striving for victories.  That every time a freedom was restored to the American people, that would be a victory.  That when the Canadian border was opened again, that would be a victory.  That when an American can travel to Europe without a passport, and without taking off his or her shoes, and return to be greeted by spouse and children at the arrival gate, those would all be victories.  I challenged them to work for the good of the American people and the world.
Was anybody listening?  Dunno.  But you can't say I'm not trying.
It may be that the most useful thing I did was to bring along a stack of Cory Doctorow's brand-new YA novel Little Brother and hand them out to all the DHS people I met.  The book is about a smart high school kid who gets swept up by the DHS in the wake of a terrorist bombing in San Francisco and imprisoned in "Gitmo-by-the-Bay."  After he's released, he decides to take down the DHS and restore freedom to American citizens.
A fabulous book and one that I think is going to make Cory a lot of money.  More importantly, it's like a tool kit for citizens yearning to breathe free.  If you know a smart high school kid with a healthy disrespect for authority, you know someone who needs this book.
I told the DHS guys (who I truly believe are honest and decent people, trying to do a very difficult job) that they should take special note that Doctorow spends not one sentence trying to convince the reader that the DHS would make a grab for power, given the chance.  It's simply what everybody already believes.
So What's the Photo Above All About?
It was forbidden to take photos in the exhibition halls, where the contractors displayed their techie wares, and I thought it prudent not to do so in the meeting rooms.  But Bud Sparhawk and I were talking to a woman at the Nevada Test Site (providers of fine chemical, biological, radiological, nuclear, and explosive testbeds for over half a century) booth and when she asked who we were with, explained that we were science fiction writers.  A few exchanges later, she said, 'Wait -- you weren't kidding!" and was so impressed that she gave us each a souvenir NTB clock-and-paper-clip figurine.
It can't possibly hurt national security to show it to you, and so here it is.
And as Always . . .
The poem du jour blog continues apace.  Yesterday's poem was Allen Ginsberg's encounter with Walt Whitman in "A Supermarket In California."
*
Posted by Michael Swanwick at 6:47 AM

I am reading that Doctorow book right now and it's so good I feel like I am reading a Heinlein book.

I recommend handing out copies of "Radiant Doors." DHS would become infatuated with the possibilities inherent in that scenario and devote all their resources to making it happen.

As a side benefit, they wouldn't have time or interest for egregious privacy violations anymore. In other word, if DHS devoted 100% of its DHS budget to homeland security time travel research, we would all be better off.

Yes, if Cory can write more like LITTLE BROTHER, he'll be a major power in the YA field. (Though his accomplishment will remain undiminished, if he decides not to.)

My own personal fantasy is of finding something constructive, something positive for DHS to do with its vast budget. Not that I'm holding my breath.

Incidentally, the conference was held in the Ronald Reagan Building. It took me all of five seconds to figure out how to circumvent the security there.