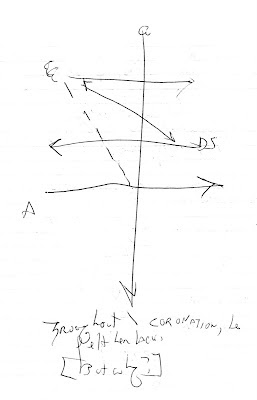 .
Diagram 26.  If it's Wednesday, we must be diagramming Babel again.   Today's rather unsightly scribble was obviously done in haste -- and that's a good thing.  It means I had a pretty clear idea of what I wanted to do and was anxious to get to work.  The clean, elaborate diagrams are the ones where I had lots of bits and pieces I knew had to be fitted in but no idea of where the plot should go or how to make it work.
You can also tell that this is a chaotic time for Will.  People slash across his plotline, there and gone.  They have connections to each other that are not apparent to him.
From top to bottom:
W
E
DS
A
Throughout the coronation, he
felt her lack.
[But why?]
Annotations:
W is Will.  E is Esme, probably; I don't think it can possibly be Enoycla.  A is either Alcyone or Ariel, but for the life of me I can't remember which.  And DS has got to be Dame Serena.  But where the hell is Florian?
Well . . . these things are ephemeral, drawn mostly for the purpose of bringing me into the plot.  It doesn't really matter that I have no idea now what was going on, so long as I understood it then.
The dotted line indicates action taking place outside of Will's (or the reader's) awareness.  It was there to make sure I remembered to put in the necessary bits of foreshadowing beforehand and sufficient explanation of what had happened afterwards.
I can tell the book is heading toward the climax, though.  At the end of the diagram, Will goes into the coronation and discovers that the Obsidian Throne is nothing like what he'd imagined it would be.  The cryptic comment at the end reflects the fact that for plot reasons Alcyone could not be present for the coronation.  So I had to come up with a reason why she wouldn't be.
Oh, and that downward slash (\)?  My shorthand for "the."  An upward slash (/) repesents "and."
*
Posted by Michael Swanwick at 7:38 AM