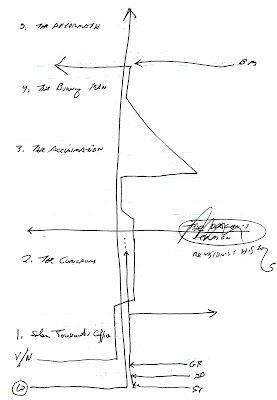 .
Diagram 25: How long, O Lord? How long can these diagrams possibly continue? Well, I have good news. There are only six more to go.

Consider this my belated Groundhog Day present to you.

The various initials stand for Will, Salem Toussaint, Jimi Begood, Ghostface, Vickie and/or Nate, and everybody's favorite fanatic, the Burning Man. You’ll note that this is an awfully quick sketch, basically a map of how much I hoped to accomplish that day if at all possible. Acclamation is misspelled and I drew a character line for the Burning Man next to the incident labeled “The Burning Man,” neither of which I would have done if I’d been paying much attention.

The line for Victoria (never call her Vickie) and/or Nate travels alongside Will's when they're together and darts away when they're apart. Note how suddenly and finally they separate. That's a major plot point right there.

Note also the scribbled-over “The Dragon’s Sermon.” I originally meant to give Will’s inner demon a voice, rather like Faust's sermon in Jack Faust. For artistic reasons, I decided to replace that with a revisionist history. Which may be just as well. It was alarming how many people thought that the caustic cynicism in Faust’s sermon was a naive reflection of my own true opinions. Reading is a dying art.