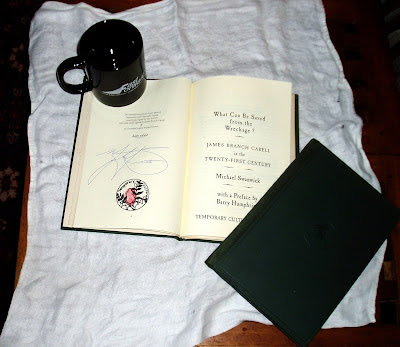 I've just received my copies of the extremely rare limited edition hardcovers of my latest book, What Can Be Saved From the Wreckage? James Branch Cabell in the Twentieth Century. They look good, don't they?

For those who came in late, the text is my rather long (18,000 words, roughly) essay summing up JBC's life and career and passing judgment on every book (somewhere around fifty) in his literary oeuvre. It took me over thirty years to do it, but I tracked down and read every single one.

Henry Wessells has made of this a slim and elegant book, available in trade paperback in an edition of 200. The hardcover, however, is limited to seventeen copies -- signed by myself, the introducer Barry Humphries (best known as Dame Edna Everage), and James Branch Cabell himself. The full explanation was made in an earlier blog entry here.

So, given that Henry surely kept two copies for himself and gave another two to Barry Humphries (himself an avid rare book collector), that means that there are only eleven copies theoretically available to the public. But of course Henry has other friends, and since he's a rare book dealer, many of those friends are collectors. So I'm guessing they're all spoken for already.

And I've got two of them! Which means that it's a particular pity about the coffee rings. And the fact that I seem to have misplaced one. I think I may have accidentally kicked it under the couch.
Posted by Michael Swanwick at 6:34 AM

Labels: James Branch Cabell, What Can Be Saved From the Wreckage?

Might not some carefully orchestrated wear enhance the collectibility of the book? A ringmark left by James Branch Cabell's own coffee mug for example.

I understand that the James Branch Cabell Library has a Starbucks in it.

If carefully orchestrated wear and tear makes a book more valuable, then my net worth is increasing daily. Luckily, I have no desire to sell anything, so I'm only harming my heirs. And in the meantime, I console myself with what what Michael Dirda exclaimed upon examining Gardner Dozois's bookshelves: "Gardner, you have the most delightfully READ books I've ever seen!"

What on earth would Cabell have made of the Starbucks? The mind boggles.

The pristine unread books on my shelves are increasing both in absolute numbers and as a percentage. They may already be in the majority. I find it genuinely depressing.