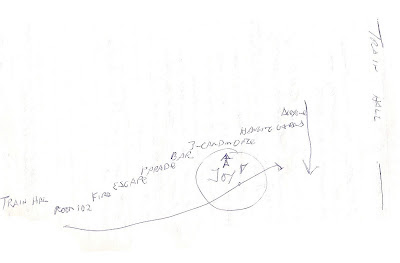 Diagram 9. Will has reached Babel and I'm graphing out the Train Hall scene. Left to right, it reads:

What's missing at this point is the entire section of the novel which was later published in altered form (see A Nettlesome Term That Has Long Outlived Its Welcome) as "Lord Weary's Empire." Since "Lord Weary's Empire " -- which will eventually take place between the Bar and the 3-card Monte scenes -- was short-listed on the Hugo ballot as a novella, you can see that there's a lot that has to be established before the novel can get where it's going.

You can also get a rough idea of how much of the novel was made up as I was writing it.

So what does the Train Hall look like? Here's the passage:

The walls and pillars of the great hall at Nineveh Station were of snow-white marble, according to a tourist brochure that had passed through so many hands on the train that it was falling apart by the time Will saw it. “Seven pillars on either side bear up the shadowy vault of the roof; the roof-tree and the beams are of gold, curiously carved, the roof itself of mother-of-pearl,” it said, and also, “The benches that run from end to end of the lofty chamber are of cedar, inlaid with coral and ivory . . . The floor of the chamber is tessellated, of marble and green tourmaline, and on every square of tourmaline is carven the image of a fish: as the dolphin, the conger, the oroborus, the salmon, the ichthyocentaur, the kraken, and other wonders of the deep. Hangings of tapestry are . . . worked with flowers, snake’s-head, snapdragon, dragon-mouth and their kind; and on the dado below the windows are sculptures of birds and beasts and creeping things.”

Can you spot where the quotation came from? Here's a hint: It's a classic work of hard fantasy.


Posted by Michael Swanwick at 6:11 AM

Bingo! THE WORM OUROBOROS, from the almost airlessly static first chapter, "The Castle of Lord Juss." If you read the book carefully, you can see Eddison improving as a writer as he goes along. The author of MISTRESS OF MISTRESSES was greatly superior to that of WORM.