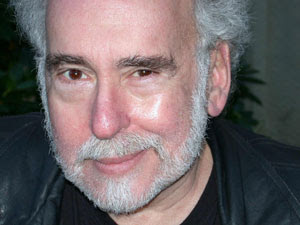 The first-ever WSFA Small Press Award winner was announced Saturday at Capclave, in Rockville, Maryland, just outside Washington, D.C. (The Washington Science Fiction Association runs Capclave, which replaced Disclave, one of the older and better American regional conventions, after an incident in 1997 involving the sprinkler system and a New York City cop who was into bondage. It’s a long story.) The winning story was “El Regalo” by Peter S. Beagle, from his Tachyon collection The Line Between.

Accepting the award for Peter Beagle was . . . me.

You can imagine how delighted I was. Peter S. Beagle is an important figure in modern fantasy and a personal hero of mine. I was a teenager when I discovered The Last Unicorn and A Fine and Private Place, and realized that major fantasy work was being written by somebody who was still alive. (Okay, Tolkien was still alive back then too. But even then we all knew we were going to have to wait until he was dead for his next book.) And of course I thought: If he can do it, then why not me? It was a major goad to my ambitions.

Here’s the speech I was given to read:

My notion of a literary award generally involves first-class flights, lavish financial compensations, incredibly costly dinners, and four-star hotel accommodations complete with hot and cold-running groupies. The way I look at it, if it's good enough for Harlan, it's good enough for me. But I gladly make an exception in this case, because (and I know this is a cliche), far more than the mighty international conglomerate, it is the small press, the minuscule press, that remains, and will surely remain, the life force behind what we here create.

The saying, Freedom of the press belongs to the person who owns one, is perfectly true; there is a reason that - even in the age of the Internet - dictatorships, juntas and fascist mobs still physically destroy every printing facility they can reach. In the end, as I'm happy to say, and as every jefe maximo knows, literature and literacy itself are always the enemy. And yet, somehow - call it samizdat, or anything else you like - the small press survives; the smudgy mimeograph, the battered copier, always rises again from the bloody shambles. Always, at whatever cost. Always.

Therefore I am grateful for this award, and will treasure it for everything it represents. Later for the Pulitzer, or the National Book Award. This will do me fine.

The audience, I should note, laughed at all the right places and none of the wrong ones, and gave the great man a thunderous standing ovation at the end.
Posted by Michael Swanwick at 5:54 AM