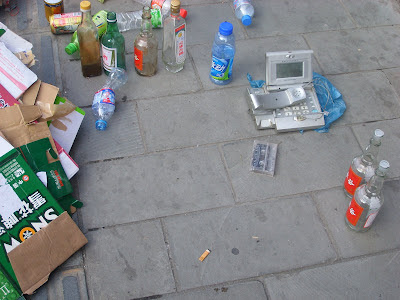 Neil Gaiman has already blogged about this, but what the hell. There were only two moments when the Western guests at the 2007 International Science Fiction and Fantasy Conference in Chengdu baffled our hosts with our inscrutable Occidental ways. One was when Neil and I were on a bus with editor Jenny Bai and our interpreters, Heather and Cecilia. There were only two seats available, and the ladies wanted Neil and myself to have them. "No, no, no," I said, "there is no way I can possibly take that seat and leave you standing. It's simply not going to happen." And Neil amplified, "It's a cultural thing. There's nothing you can do about it" So two of the women sat, although it was clear they had no idea why we insisted on it.

The other moment was when we came upon what looked to be a scavenged videophone carefully set alongside a stack of cardboard and some glass and plastic bottles by a curbside recycler. "It's a Bill Gibson moment!" Neil and I said in unison, and we began dancing about, snapping photographs.

"Why are you taking pictures of that?" somebody asked, almost forlornly. And it was hard to explain. But back in 1984, when Neuromancer came out, Bill's trademark combination of high tech and street scavenging was a vivid snapshot of the future. And now here it was, in Chengdu, an industrial city of eleven million people inside a China whose economy is booming, and suddenly it's not the future anymore.

It's just the present.
Posted by Michael Swanwick at 1:14 PM

What was this guy doing? I am a Chinese but I have never seen this kind of thing before. Well, I left China for 13 years already. Things change fast there.

Incidentally, are you any relation to Haihong Zhao?

I like the middling-tech of the casette tape lying there, too. Kind of ties the whole thing together.

Not really. But we are firends and we may have the same ancester 500 years ago. Anyway she called me "Benjia" elder brother, which means a brother in the same clan. You might know that she has a master degree in English, and she has translated some sci-fi stories and at least one book into Chinese, and she is good at it. I once translated Nancy Kress' story "My Mother, Dancing" into Chinese, and I asked her help to look over my translation.

By the way, I am now living in Rochester, and I am a friend of Nancy, and I am a big sci-fi fan, and I loved many of your short stories (like many other Chinese sci-fi fans), and I am happy to have a chance to talk to you in the internet.

Thanks for your kind words, Ruhan.

Yes, after many years of empty promises the Web is getting pretty good at bringing people together.

I still haven't figured out how to make this blog available in China, though. I may eventually have to buy some host space and create a mirror site. If I haven't totally garbled the lingo here.

I am using a free blog site from sina.com, which is the one many Chinese used. However, its interface is in Chinese:

I just asked my friends in China. I was told that msn space (http://home.services.spaces.live.com/), which has blog services, can be read in China. Also the following free blog service is okay in China:
http://wordpress.com
I think Chinese sci-fi fans would love to read your blog.

My thanks for your help, Ruhan!

Whether Chinese readers like my blog or not is entirely their own decision. But now they can decide for themselves. Following your directions, I've created a mirror blog at michaelswanwick.wordpress.com and, starting tomorrow, I'll add one posting per day until the one blog has caught up with the other, and then I'll post on both simultaneously.

Not that I think that what I have to say is in any way essential to Chinese science fiction fans. But they should have the option of deciding for themselves what they think of it.

It is my plessure to help you to open the mirror site for Chinese SF fans. I have annouced its openning in a Chinese SF discussion group (with almost 3000 people in it). Many Chinese readers, including Jenny Bai from SFW, can read it now. But there are still some other Chinese readers having trouble to see it (especially those from some universities). I just happen to know that Ms. Cecilia Qin is also in that discussion group. She tried to get in that mirror site from her university net yesterday but failed.

Hmmm. Well, I'll keep posting there for a while and see how the stats do. And I'll continue to look for some other way to make the blog available in China. I'm beginning to think that no blog hosting service will do. One of the featured blogs on Wordpress this morning was somebody's call for the world to boycott the Beijing Olympics. That CAN'T make the government there happy.

Well, at least many Chinese now can read your blog there. Hopefully the site will be kept open in China.

Cecilia said that finally she could access the wordpress site.