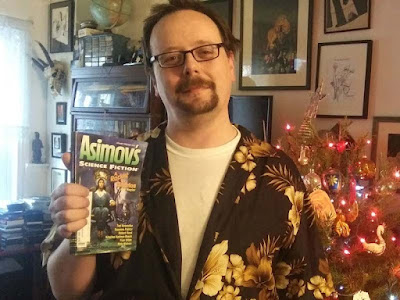 I don't think anyone at all familiar with ASIMOV'S and the high standards maintained by editor Shelia Williams would ever have suspected that Sean's story could be anything less than good. If it sold to ASIMOV'S then we *know* that it's at least good, and quite possibly very good indeed. I look forward to receiving my subscription copy so I can see for myself.

Congratulations on your first pro sale, Sean! May it be the first of many.

Congrats! Can't wait to read it!

Congratulations to Sean and mazel tov to you, too, Michael!

Congratulations to him & you!

I still remember reading, and being impressed by, his essay in the Readercon program book the year you were GOH.

A belated congratulations to you, Sean! This is fantastic news.

(And congratulations to both your parents for raising such a fine son.)