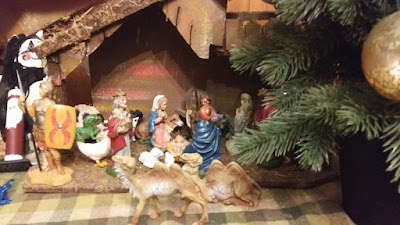 There is a legend that on Christmas Eve the animals can talk.  Yet of all the many animals you’ve known or owned, be they pets or next-door dogs or half-tame squirrels that you almost got to accept a peanut out of your hand once, none have ever done remotely anything like that.

Yet the legend is true.  It just doesn’t apply to all animals.  It applies only to those who were in one specific manger on the outskirts of Bethlehem two thousand something years ago.  These were all made immortal by the Infant Jesus who, like any other child, had an inordinate fondness for dumb beasts.  And for 364 days of the year (365 on leap years) they’re dumb in both senses of the word.

On Christmas Eve, the cow and the donkey and the little goat that gnawed on Baby Jesus’s blanket are given the gift of speech.  As are the two lambs who wandered in looking for fodder, the camels who carried the magi to the event and then stuck their noses in the window to see what was going on, and the pigeons who fluttered in the rafters while Joseph muttered angrily about their droppings.

“It was cold outside,” says a lamb.  “But I found a warm spot to sleep right over there.”

“I gnawed on a blanket,” says the goat proudly.  “But somebody yanked it away.”

“I wonder who?” murmurs a dove.  For animals have very little sense of what is and is not important, once you move away from the compelling subjects of food and sleep.  The fact that there were people present two thousand years ago is almost forgotten.  Who those people might have been is entirely beyond their ken.

Still, like any other old-timers, they do enjoy reminiscing.

"Manger Animals" is copyright 2011 by Michael Swanwick. It first appeared in It Came Upon A Midnight, a Dragonstairs Press chapbook.