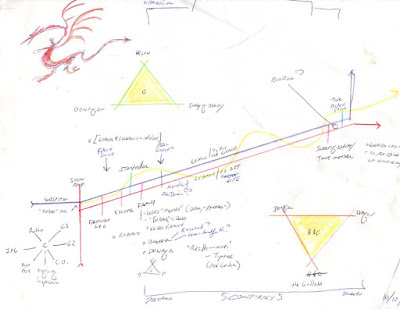 Look what I found, buried deep in the papers on my desk!

This is a very early plot diagram for The Iron Dragon's Mother. It's interesting to contemplate how I thought it might all play out. Helen's line (in purple) notes that she learns the world she finds herself in, while Caitlin, indicated by the red line, learns "to act." (In the actual fact, Caitlin always knew how to act; what she learned was how to lie.) To these are appended the observations that Caitlin learns life while Helen learns to die.

Also interesting is that Fingolfinrhod, as yet unnamed, was being considered as a recurrent character and as a possible love interest for Helen. One could see Helen falling for him hard--she always had a weakness for disastrous boyfriends.

But there at the end of the timeline is a short exchange between Caitlin and Helen. The subject is Caitlin's mother (one of several), the Dowager. Caitlin speaks first:

"You're asking me? I never could handle my own."

So I knew right from the beginning that the novel would end with the question of what to do with the Dowager.Which means I had a better grasp on the shape of the thing than I often suspected I did, when the writing got difficult.

It's quite a lovely chart. I'm particularly fond of the wispy dragon in the upper left.