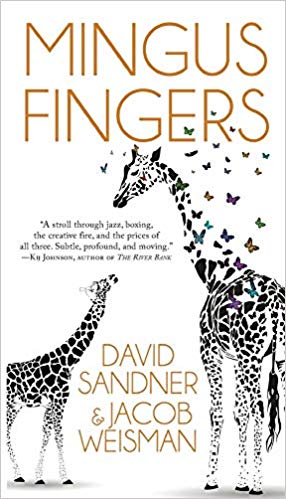 That was long ago, and the sub-genre died pretty much away.

But here comes its resurrection, "Mingus Fingers" by David Sandner and Jacob Weisman and the first of two things that makes it particularly interesting is that while the protagonist is good enough to sit in with Charles Mingus, he's nowhere near on the same level. But his underage nephew and ward, Kenny, might well be.

Take my word for it, it's tough to donkey up the knowledge to convincingly portray a jazz musician or a boxer. Doing both in one story? It's a recipe for disaster.

Yet Mingus Fingers is not a disaster. Rather, it's a graceful and touching portrayal of a man with the odds loaded against him who gives his all for a child who has a shot at something more than he ever had.

This is a slim $8.00 single-story paperback from Fairwood Press. It's nicely made, too.

"Mingus Fingers" is a great title. Can anyone recommend any other science fiction novels or stories about jazz musicians?

This would be a great question on Twitter or Facebook, but I can't answer it. There are a great many sf jazz stories. I know because when I was first published in the 1980s, rock and roll stories were almost impossible to sell.