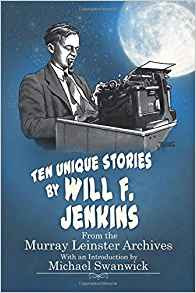 There was no more important writer in the period between H. G. Wells and Robert Heinlein than Murray Leinster. Who was actually a Virginian named Will F. Jenkins.

In a career that began in 1913 and ended with his death in 1975, Jenkins published some 1,800 stories in more than 150 periodicals, as well as 74 novels and collections. Only a small part of his output was science fiction -- and that was written over the horrified objections of his agent. (SF didn't pay as well as the slicks, which were his usual markets.) But Jenkins loved science and wrote science fiction for the fun of it, utilizing the Leinster pen name to protect his other fiction.

Making it ironic that today Will F. Jenkins is remembered almost entirely for his science fiction, which included the first alternate history story, the original first contact, and, in "A Logic Named Joe" (Astounding, 1946), a truly prescient description of the Internet.

If you're like me, you've probably wondered what Jenkins' other fiction looked like but never had the time and energy and resources to go digging through old mainstream magazines to find out.

Well, good news! "Ten Unique Stories by Will F. Jenkins from the the Murray Leinster Archives" has just gone up for sale in e-book and paperback formats. (Created and edited, though she takes no credit for it, in an act of filial piety by his daughter Billee Stallings.) And I wrote the introduction!

Here's how the intro begins:

Introduction: Will Jenkins, Writing as Himself


“I have a new theory about the natural structure of story,” Will Jenkins said. I was in his house, Ardudwy, in Gloucester County, Virginia, along with a fellow student who was also a science fiction fan and an indulgent William and Mary professor who thought we’d get a kick out of meeting a real writer. “I think it goes back to caveman times. A bunch of hunters are sitting around a campfire and one of them says, ‘It was pretty clever of me, the way I killed that cave bear today. Of course, he had me down for a moment and I thought I was going to die. But then I came up with that trick.’” A pause. “‘When I left the camp this morning, I had no idea that…’”

Jenkins let his hypothetical narrator trail off, and laughed.

That was nearly half a century ago and I still cherish the memory of that one-time-only encounter with the man who, even then, was known chiefly for his seminal works of science fiction. Which is ironic, because…


If you want to read the rest of my essay, it's visible in its entirety using Amazon's "Look Within" function here.  Or you could simply buy the book.

Without meaning to do so, I let my blog lapse. I was busy, I was traveling, and I had rather a large backlog of work to see to. Mea culpa. I'm sorry for that.

But now the blog is back! And I'll have a lot of things to post about over the coming months. So welcome back.

I'll do my best not to wander off in a haze of forgetfulness this time.

Posted by Michael Swanwick at 12:59 PM