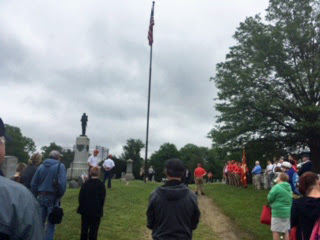 Memorial day was cool and overcast, as in my memory it always is. As a child, I would accompany my father as he went to a different cemetery every year for the memorial services. He was a radio operator for a B-26 bomber in WWII and even though I was very young, the seriousness of the day impressed me greatly.

The turnout for the ceremony in Levering Cemetery was small because most neighborhood people go to the larger one, an hour later, at the war memorial in Gorgas Park, not a quarter mile away. I like the one at the cemetery, though, because there are soldiers buried there from the American Revolution and the Civil War, as well as more recent wars, and because the presence of their graves reminds everyone of what the day of memorial is all about.

There is always a short speech and of course it's patriotic. There's always the 21-gun salute. But the ceremony is not about the country and it's not about the military. It's about showing respect to those who died before their time. Some of the vets present would be thinking about those they knew who had surrendered their lives far before their time. I know my father was. And before that, one has to stand humble and silent.

I read an account once in the local paper about the homecoming of the 153rd Pennsylvania, "Northampton's Own." They were met at the train station here in Easton and paraded up Northampton St. to the Fairgrounds, where many long and flowery speeches were made praising their feats on the battlefields of Chancellorsville and Gettysburg. An epic poem in heroic couplets was read to them recounting their deeds and the ultimate routing of the rebels. And at the end of it, Col. Glanz was presented with a sword and asked to say a few words in reply. He stood wearily, looked about the hall, and silence fell. He said, "Danke." And then he sat down.

What else could he say? He had been there, and they had not.

Our next door neighbor was in the RAF during WWII and occasionally goes back to London for Remembrance Day. He showed us a video of the ceremonies once and when, during a long speech, the camera panned over the vets, all old and some in wheelchairs, Albert said. "It was bloody cold out there! You should have heard some of the things we were saying about the speakers."