Good News For Everyone Who Happens To Be Me! 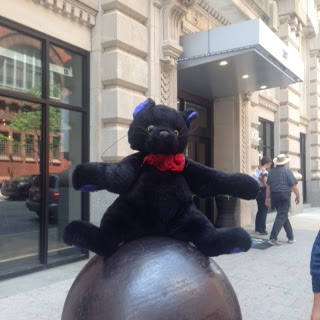 For a writer, this is a big deal, so I'm extremely happy about it.

Here it is in its entirety:

Multiple Hugo Award–winner Swanwick (Chasing the Phoenix) returns with this superb collection of stories published between 2008 and 2014. Ranging across the various subgenres of fantasy and science fiction, the volume includes the Hugo-winning “From Babel’s Fall’n Glory We Fled...,” in which a space suit AI narrates how its owner escaped from a conquered alien metropolis with a burden of incalculable value. Other stories of note are “The Man in Grey,” whose title character is one of reality’s stage managers, in charge of making sure that the props and sets are in place for the 50,000 people who really exist in our universe, all others being mere illusion; “Tawny Petticoats,” in which swindlers Darger and Surplus are taken in by the dauntingly beautiful title character; and “The She-Wolf’s Hidden Grin,” in which two poor little rich girls living on a grim colonial world discover their true alien heritage. Each of these 17 stories is a gem, beautifully written, expertly plotted, with brilliantly developed characters. This is as good as short speculative fiction gets.

And here's the blurb that will most likely go on the book:

Each of these 17 stories is a gem, beautifully written, expertly plotted, with brilliantly developed characters. This is as good as short speculative fiction gets.-- Publishers Weekly (starred review)

So, yes, I am very, very happy about this.

Actually, "From Babel's Fall'n Glory We Fled" didn't win a Hugo. It was nominated but lost to Ted Chiang's story, "Exhalation." Over the years, I'd had remarkably good fortune in the stories I've lost to. Octavia Butler's "Blood Child" was another one I wasn't embarrassed to lose to.

No, I didn't manage to blog yesterday. Mea culpa. It's summer and it's hot and I was lazy. I'll do my very best to get back on schedule tomorrow.

Above: "It's da bomb!" says Beelzebub, the promotional cat. Shown here in Baltimore sitting atop an unexploded shell that fell into Fort McHenry during the Battle of Baltimore in 1814.

And eminently deserved, you li'l ol' gem-cutter, you.

THAT is a GREAT review! Many congratulations!

Also good news for people who are not you, but enjoy reading things written by you. Good news, because 1. we like to share the joy, and 2. because we want to see you encouraged to keep writing.