Everything That's Wrong With Your Story -- Sight Unseen 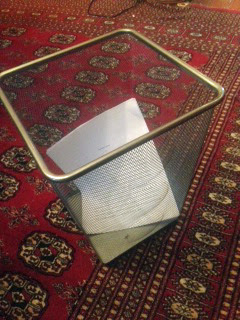 
Last weekend, at Balticon, I got into a discussion with Connie Willis about teaching new writers. She told of the time she addressed a group of such and said, "I'm going to tell you everything that's wrong with your stories."

They all eagerly began pulling out typescripts. But Connie stopped them, saying, "No, I don't need to see them. Because you all make the same mistakes." And proceeded to run down the list of Universal Newbie Mistakes.

Then Connie laughed and said, "Boy, I never did that again."

We didn't discuss what those mistakes were, because anybody with experience teaching already knows. But it occurred to me that it might benefit some gonnabe writers if I spelled out the mistakes you're making that are so obvious that I don't even have to look at your story to know you're making them.


1. Starting before the beginning of the story.

The first thing I do with a student story is to cross out all the scene-setting that new writers think is necessary before the story can begin. Somewhere on page 3 or page 8 or page 32, I'll finally write: BEGIN HERE.

Poul Anderson observed that three evocations of the senses are sufficient to make any scene vivid. A man walking along the beach hears the crash of waves and cries of gulls. He smells the salt air. He feels the seaweed popping underfoot. You've nailed it. No need to go on describing the beach. Move on to what's happening.

Similarly, you only need two well-chosen details to bring a locale to life. In John Cheever's notebooks, he described a Sunday morning when he was hung-over and in a friend's living room, while the friend chain-smoked and talked about his impending divorce and the attendant heartbreak. Cheever wondered how to capture the scene on paper. His glance kept going from the ashtray, overflowing with cigarette butts to the agonizingly blue sky outside the picture window. Blue sky, ashtray. Ashtray, blue sky. Nothing more is needed.

3. Not trusting the reader.

Technically, number 2 belongs under this heading, but I thought that it needed spelling out. The new writer is prone to lecturing, hectoring, underlining, repetition, condescending, and above all repetition simply because he or she does not trust the reader to "get it."

Your readers are on your side. They want your story to be good. And they're surprisingly perceptive -- chiefly because they've read a lot of fiction before yours. You can trust them.

Those rare exceptions who are complete idiots? Forget 'em. You can't win them over anyway.

4. Being afraid of emotion.

Yes, emotions -- particularly negative emotions -- can be scary. Embarrassing too. But they're a good part of the reason we read fiction. If the logic of your story insists that your protagonist would throw herself in front of a train, then it's a violence to the story not to let her do so. Tolstoy understood this. So should you.

5. Having too few characters.

Your characters live in human society. The reader cannot see that society without a representative sampling of its citizenry. And your protagonist needs to express a variety of emotions in order to feel well-rounded.

Also -- and I speak from experience here -- while it's possible to write a story with three characters, which is usually considered the minimum, or even fewer, which usually involves the environment serving as an uncredited character -- pulling it off is hard work. Not many new writers have the craft to do that.

6. Letting the ending trail off.

When the story's over, it's over. Get off the stage. You don't need to let everybody know what came next or how the characters felt about it. You don't have to end with the story's climax. But what comes after shouldn't sap away all the energy of the climax.

7. Not having a good ending.

Back when I was on the Nebula Jury, which is a long story and one I won't go into here, I read pretty close to all the genre short fiction published over several years. From this, I learned two things: First, that no story that starts out badly ever turns into a good story later. Second, that nine times out of ten, when a story that starts out well turns out badly, it happens in the final pages.


This set of failings applies to pretty much all writers, whatever they're trying to accomplish. But there's one that's specific to writers of fantasy and science friction and that's this: 8. Your ideas are too small and derivative.

But that's a big topic and one I'll tackle some other day.

I'm on the road again. Tomorrow I'll be at the Mercer County Library in Lawrenceville, New Jersey for the very first Laffcon. This celebration of the life and work of R. A. Lafferty is a one-day free event, and will run from 10 a.m. to 5 p.m. The doors open at 9:30.

Lafferty was the single most original science fiction writer ever -- and I don't make that claim lightly. It promises to be a fun day. If you're in the area, you should consider attending.

Camels and dromedaries, Clem! I have a conflicting commitment.

Great post, and good useful digest even for a person who (like me) studies fiction rather than writes it. Because I do study it, may I ask if for "Flaubert" you mean "Tolstoy"? It's Anna Karenina who throws herself under a train; Madame Bovary drinks poison. (But there may be some train-crunched Flaubert heroine I missed.)

Great insight. Delia Sherman sent me here from facebook, just so you know.

WAIT. There's a con for R.A. Lafferty?? HOLY COW. I wish I were nearby...have a great time!

Thank you, V of Norwich. Correction made.

I suspect there'll be another one next year, RedAlice. This one went very well.

If there is, I'll do my best to spread the word early enough that everyone can consider whether to attend or not.


'...there's one that's specific to writers of fantasy and science friction and that's this: 8. Your ideas are too small and derivative.

But that's a big topic and one I'll tackle some other day. Maybe'

Maybe you already did tackle it, Michael. Today's was good advice. But last September you wrote this --


Yet Another Story I Wish You Guys Would Stop Writing
http://floggingbabel.blogspot.com/2015/09/yet-another-story-i-wish-you-guys-would.html


-- and it's pointed advice you could profitably re-publish every couple of months. (Profitable not for you, but for a large number of current aspirants.)

Damn it. I live twenty minutes from Lawrenceville and missed it.

Great post! When you expand #8, would love to see your pics for stories that do use expansive and non-derivative ideas... Either online or paper-recs.

I hear you're at Garden State Speculative Writers next month!

Sorry! Edited for sense and reposted...

I think many writers would agree with most of this, but I can't help imagining how the first rule would be applied to (say) M. R. James, both his declared principles for writing a supernatural horror story and how he applied them to his own work.

All writing advice is declared null and void whenever someone can write a good story that violates it.

And the writing advice above (and its ilk) is only meant to help new writers get to the point where they can write and sell a decent story. After that, all bets and restrictions are off.