Con Men, Dumplings, Geekadelphia, and Me 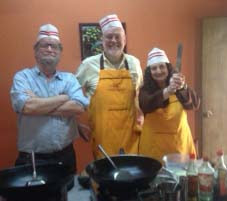 The book launch at Main Point Books in Bryn Mawr was a great success. Also a terrific place for a reading and signing.  They really have a nice selection of books. And I got to see some dear friends too.

Not coincidentally, the same day my book launched, two related items appeared online. The first was Chris Urie's interview with me about Chasing the Phoenix on the Geekadelphia website. Here's a snippet:


I was reading Thomas Pynchon’s Mason & Dixon and came upon a scene with a talking dog so good that I said, “I want to do that.” To avoid writing a weak imitation, I made my dog anthropomorphic. set him in a Postutopian future, and made him a con man. Which, in a roundabout way makes the series character-oriented because I had no idea what to do with Surplus before Darger approached him with a business opportunity.


You can find the interview here.

Also on launch day, Shawn Speakman's blog Suvudu featured my reminiscence on the time a pair of con men tried to separate me from my money, using an updated version of the Pigeon Drop. Here's how my adventure began:


My one brush with genuine confidence artists happened in the Eighties. I was in Center City Philadelphia when I was approached by a worried-looking little man with a crumpled piece of paper in his hand. “Please, sir, can you help me find this address?” he asked in an unfamiliar accent.


You can discover what happened then here.


And for those who think that all that's not enough . . .


A couple of days ago, Fran Wilde featured me on her Book Bites thingummy. In which she asks an author to provide a recipe and then describe cooking it.

So, hard to believe though this may be for those who know me, I wrote a short essay titled Making Jiaozi Dumplings in Yangshu.

And there's a recipe too! So you can do the same thing.


Above: There I am with living legend typographer John Berry and living legend editor Ellen Datlow in Yangshuo. Ellen is demonstrating her approach to manuscripts she feels are too wordy.


Posted by Michael Swanwick at 7:58 AM