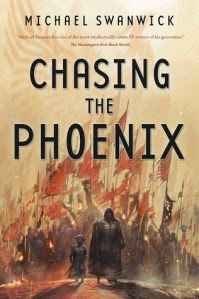 Apparently a date has been set for Chasing the Phoenix, my second Darger and Surplus novel, and it is... drum roll, please!... August 11, 2015.  That's the cover up above.  The big fella would have to be Vicious Brute.  And the little one?  Maybe Little Spider, possibly even Surplus.  Though that would make Vicious Brute very large indeed.

You can read an anticipatory review (based on the publicity material rather than the text, which is not available yet) over at Bibliosanctum by clicking here.


And at this very moment, I'm going over the copyediting . . .

Talk about a thankless job!  No writer enjoys having somebody second-guessing his or her long-labored-over prose.  And the fact that the copyeditor occasionally discovers actual typos doesn't make it any better.    One blushes, stammers, looks away.  (My least favorite?  I had a character "reigning" in a horse.  Twice.)

Still, it has to be done.  Because mistakes find their way into the most tightly-written prose.  They're like cockroaches in that respect -- they want in.  And once in, they have to be stomped flat.

So I will take the opportunity to say:  Thank you, Christopher.  I mean that sincerely.  Even if I do say it through gritted teeth.

Congratulations Michael, we look forward to your new book.