Silent On A Peak In Darien 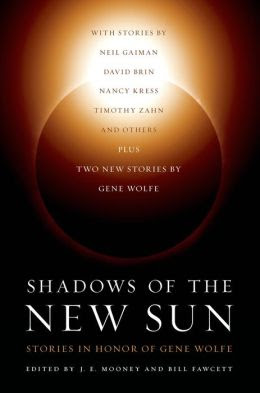 So here it is at last, the distinguished thing!  Today is the official publication date for Shadows of the New Sun, a festchrift in honor of Gene Wolfe.  (A festschrift for those who don't know -- and why should you? -- is a collection of writings in honor of a great personage.  Often, they're essays and reminiscences, but in this case they're all stories, mostly set in worlds of Gene's creation.)

I was thrilled to be in this book, particularly since my story, "The She-Wolf's Hidden Grin," was written as a homage to "The Fifth Head of Cerberus."  Which was an extremely important story to me.  It opened up great vistas of literary possibility.  When first I read it, I felt like:


And never mind that it was Balboa who actually saw the Pacific.  That sense of awe was the same.

What I did with my story was to take Gene's and run a series of reversals on it.  The two brothers become sisters, west becomes east, sunset turns to sunrise, and so on.  When you reverse something, of course, it does not turn into its opposite but into something like your image in the mirror -- very similar, subtly off, and if you examine it closely enough: disturbing.

In order to write my story, I had to examine Gene's original very closely.  I drew  maps, read critical essays, and ended up learning a great deal about writing.  Since there was only so much time, I wound up with a short story.  If there'd been time enough to write a novella the length of "Cerberus," I'd have learned even more.

Wolfe is still the master.

When I was done my story, I looked it over carefully.  It was a good one and even a strong one.  But I was not pleased with it.  At one point, the story achieves a gathering momentum as it moves headlong toward a devastating ending (that is not self-praise; merely a description of what I was working to achieve), and from that moment on the reader knows what is coming and that it cannot be stopped.

This is a good, solid technique for a story, mind you.  But I was sure the Wolfe would have done something more with it, had he been in my place.

So . . . WWGWD?  I added a final paragraph which reversed the reader's understanding of everything that came before.  And took a bleak ending and made it far, far bleaker.

You have no idea how satisfying that felt.

I'm going to be on the road again.  This time, I'm off to San Antonio for the Worldcon.  If you see me there, be sure to say hi.

I had a chance to read a review copy of "Shadows of the New Sun" from SFrevu, and I loved your story. It's one of my all time favorites of your short stories (of which I am a huge fan), and one of the few stories not by Gene Wolfe to really feel like a Gene Wolfe story. Amazing!

I notice that the review on tor.com spends about half its time talking about how good your story is, which must feel good.

(Actually, I've always thought of A Midwinters Tale as your Gene Wolfe story, in the way the Legions in Time is Van Vogt and so on. Was it written as such, or is that just me?)

"A Midwinter's Tale" was very consciously a Gene Wolfe story, though not a pastiche. I wasn't writing in imitation of Gene but I was trying for that same richness of feel, particularly in the winter solstice celebration scenes.

"The She-Wolf's Hidden Grin," on the other hand was more carefully written in imitation of the original. If you compare the first few paragraphs of my story with those of "The Fifth Head of Cerberus," you'll see what I mean.