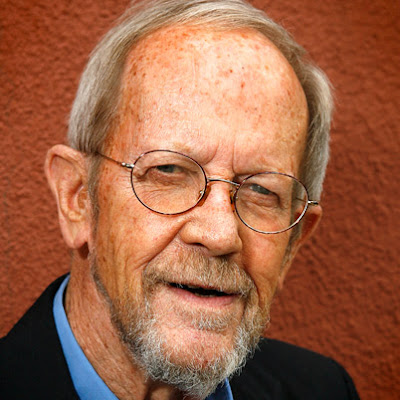 True story.  I met Elmore Leonard once.  This was back in the Nineties, so I may be a little vague in the details.  But it really happened.

This was on a Sunday at New York Is Book Country, a big outdoor book fair in the Apple.  Editor David Hartwell was running a booth and invited me to come and sign.  There was another writer there when I showed up.  Terry Bisson, I think, or it might have been Paul Park.

"Get this," Hartwell said.  "Leonard Elmore is going to drop by."

Paul, or maybe Terry, said, "I've been hearing about it all morning."

We set to business signing books for people who'd never heard of us.   couple of hours passed.

"Was it sick?" somebody asked.

"Elmore Leonard is going to drop by," Hartwell said.

More hours passed.  The way these things normally do.  Then an ordinary-looking guy with a beard popped his head in the back of the booth.  It was Elmore Leonard.  He had his wife with him.  He was looking a little harassed.

"Look," he said to Hartwell.  "I've got this thing I've got to do.  I'll try to get back here sometime later."

He looked at me.  Then he was gone.

"I think he changed my life," Terry, or maybe Paul, said.

Yesterday I got news that Elmore Leonard was dead.  He was a hard-working man and a fine, fine writer.  One who left the world a little better for his being here.

Goodbye, Leonard.  It was a pleasure knowing you.


Posted by Michael Swanwick at 6:52 AM