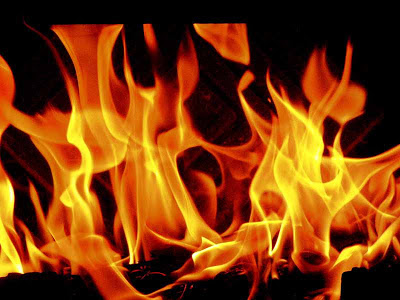 It's been so long since I relied on inspiration that I'm in danger of forgetting that it's a real thing.

Back in the day, when I was a teenage werewolf, the holy fire would descend and I would stay up all night writing, writing, writing.  That's how I came to be married, in fact.  One Friday night, I was inspired and by the time that feeling went away, it was nine o'clock in the morning.  I switched off the typewriter (a Selectric, I am proud to say), stood up, and was about to stagger off to bed, when I remembered that I didn't have any clean clothes in the apartment.  So it was either go to the laundromat right away or wake up in eight or ten or twelve hours, only to have to put on filthy clothes.

So off to the laundromat I went.

I'd been writing all night, remember.  So I'd outlived my deodorant and I needed to shave.  My hair, which back then went halfway down my back, was a mess.  So this was a very bad time to encounter somebody I knew.  But two doors down the street, there was Marianne, sitting on the stoop with her father, who had come to visit.

Mr. Porter was a snazzy dresser, and he was looking good as always.  Marianne was (and is) a beautiful woman.  I looked like the very definition of a perp.  So when I stopped to say hello, I was careful to explain that I didn't always look like this.

Marianne's father went home and told her mother about me.  Marianne's mother very firmly told her that she was not to marry me.  And Marianne, for the first time in her life, looked at me as a potential object of romance.

So I'll always be grateful to inspiration.  But I stopped relying on it long ago.  Nowadays, I rely on Sitzfleisch.  Absolutely uninspired, I plant my butt in the chair and force myself to write.  Even though I'm almost never in the mood to do so.

This is one of the differences between the gonnabe writer and the professional.  I could go the rest of my life without inspiration and never notice the lack.

Thank you. I needed this.

Did any of that stuff that was dictated by the holy fire make it to print, or was it undecipherable after a good night's sleep?

"Inspiration is for amateurs - the rest of us just show up and get to work." -Chuck Close

Correction made, Frank. Thanks! David, this was before I was publishable, so none of it saw print. It was not time wasted, though, for it brought me closer.