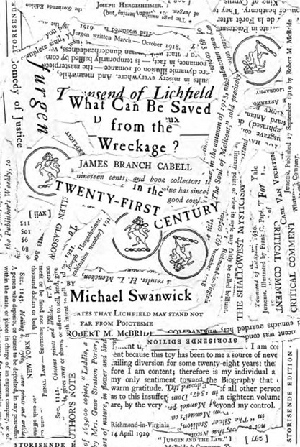 My Monday post about my nonfiction elicited an email from my friend and occasional publisher, Henry Wessels, with the heading of "Ahem."  He wished it pointed out that What Can Be Saved From The Wreckage?, my survey of James Branch Cabell's life and works, can still be bought from the publisher at its original (and quite reasonable) price.

Cabell's was a maddeningly hard to judge individual.  He married an older woman for her money and said so in his autobiographical writings.  Yet he not only refused to have his Down's Syndrome son institutionalized at a time when that was the expected thing, he included the boy in his social life.  He had a wicked sense of humor, which he frequently chose not to share with his readers.  He was a curmudgeon who could charm the pants off an interviewer, even in his curdled old age.  Every time you think you've got a handle on him, he does something to confound you.

Which is, I believe, as he intended.

As for my book . . . It's primary virtue, I believe, is for those who want to go voyaging in his fiction but do not know where in his approximately fifty books to begin.  I may well be wrong in my judgment of some of his books ( Neil Gaiman, for one, wishes I had been more bullish on a couple), but I am not wrong in my ranking.  Start with those I praise highest, leave those I liked least for least, and when you've decided your appetite has been sated, you can leave off with a clean conscience.