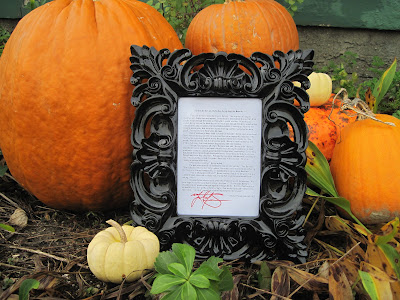 From Ghoulies and Ghosties, Long-Leggitie Beasties . . .

That year summer lasted halfway to forever.  The dog days of August stretched into September and beyond.  It was only in late October that a storm front finally swept through Winooski and brought in cooler weather.  When the rain ended, Kenny ran out the back door of his house and through the dying woods at the edge of town, into a meadow that crunched underfoot.  Looking up, he saw a bat struggle across a sky that storm and sunset working together had turned an eerie green.  For the first time Halloween felt near.

Out of nowhere, a skeletal hand clutched his shoulder and spun him around.  Kenny found himself staring into the ivory face of an impossibly lean man.  The face had no eyes, only blank skin over the sockets where eyes should be. The mouth, when it opened, was full of pointed teeth.  Kenny's heart hammered.  He tried to pull away, but those bony fingers held him like shackles.

"We are leaving, boy, all of us," the pale man said. Kenny didn't have to ask who he meant.  Kenny had spent the afternoon drawing monsters in his math workbook:  vampires, ghouls, giant spiders, frankensteins, werewolves.  Everything that people feared even though they knew better.  Everything that kids loved even though they knew they shouldn't. Maybe that was what had drawn this creature to him.  "Your kind has ruined this world. Soon you will be extinct.  So we are opening a passage elsewhere."  Then he added, "But we will not go alone."

“Where are you going?” Kenny asked.

The pale man raised his blind face to stare up into infinity.  "Far, far away."  Then he added, "But we will not go alone.  We are gathering the most sensitive and imaginative mortals to accompany us on our long, dark trek.”

“You’re taking me with you?”   Kenny was terrified at the prospect, but also a little thrilled.   He could not deny that.  But neither could he keep himself from asking, “Why?”

“Humanity has always had a symbiotic relationship with its monsters.  We give shape to the fears you dare not face. And you– ”  The hand on Kenny’s shoulder did not weaken, struggle against it though he did.  But the other hand now stroked Kenny’s hair gently, almost lovingly.  That terrifying mouth twisted into a near-smile.   “Think of yourself as a brown bag lunch for the voyage.”

So it concludes, as it pretty much had to, a breath before the plunge into the long, dark spaces between the stars.  Today I make arrangements to put the original typescript of the story (pictured above) up on auction.  All proceeds go to the Clarion West Writers Workshop.  Obviously, I'm hoping that the auction will bring them oodles and oodles of money.  But it's equally possible that it will go for a pittance.  In which case, you might wind up with something cool for your wall at far below the market rate.

For those who are reading these things in hope of getting tips on how to write:  I came up with the final sentence before writing the first one.  That way, as I was writing, every sentence was aimed straight at the ending.  This not only meant I never had to go back and excise passages that led nowhere but that the ending (ideally) has the feeling of inevitability.  This is a trick that will not work for every story or for every writer -- I know writers who write only to discover the ending, for whom this technique would simply prevent them from ever starting a story -- but it's worth your trying.

If you want to link to the final story without my commentary, you can find it here.

What a welcome treat for Halloween, especially after Sandy dumped its bag of tricks on us just a few days ago.

And with such a suitably macabre ending, it's nice to return to some spooky fiction.

Thanks, Michael, and I hope the auction goes well.