How to Write Stations of the Tide 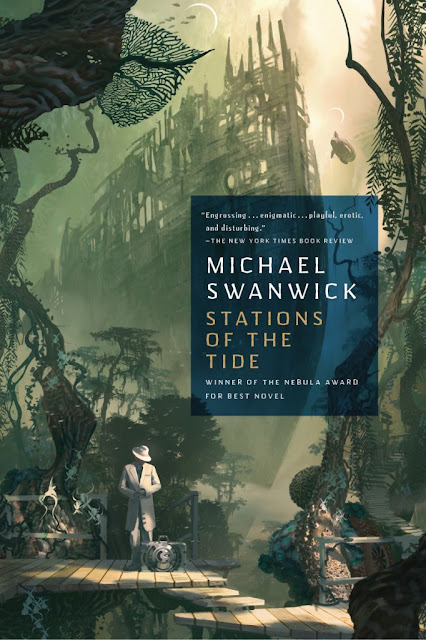 In the mail this past weekend,  I received my contributor's copies of the new Orb trade paperback reissue of Stations of the Tide with the moody and evocative Thom Tenery cover pictured above.  One of the signs that you've received a really good cover is that it contains a detail which you wish you'd thought of when you were writing the novel.

When I first saw this cover, I felt a tremendous regret that I hadn't specified that the bureaucrat was wearing a white suit and a Panama hat.

But now, of course, he is.  Because that's how he's shown on the cover, and I wrote nothing inside the book to indicate otherwise.

On occasion I'll teach one of the Clarion workshops and when I do the new writers inevitably want to know how to tell the reader how the protagonist looks.  "Tell 'em nothing!" I say.  "Or, if you can't manage that, as little as possible."

They're shocked and appalled.  They want to learn efficient techniques about conveying the facts that their heroine is 5'7", has violet eyes, flaring nostrils, a sprinkle of cinnamon freckles across her slightly bony shoulders, plump but attractive knees,a banana stuck in her ear, and ash-brown hair done up in a half-hitch.  And I'm telling them to look up exactly how many words Mark Twain wasted on Huckleberry Finn's physical description.

The simple truth is that you create an interesting character by having him or her behave in interesting ways.  The work of creating a physical image is subcontracted to the reader.  All literature being  essentially a collaboration between the writer and the reader, there's no reason for you to do all the work yourself.

And that, children, is how it's done. 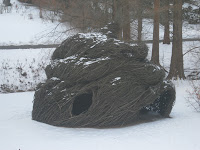 Perfectly charming.  I went to see The Illusionist (Sylvain Chomet's flawless and enchanting animation of an unproduced script by Jacques Tati), took in the Philadelphia Museum of Art after dark, and had dinner at the Pen & Pencil Club, went to the Philadelphia Pen Show and hung out with Gregory Frost and Kyle Cassidy (and we three had a business lunch to discuss various projects, including the Darger & Surplus podcasts), and had a long winter walk in the Morris Arboretum.


Above right:  It's called the Summer Palace, but this large-as-a-house built-of-sticks art installation at the Morris looks best in winter.  Go figure.  It's really got its hooks in my imagination, though.  Someday I'm going to write a story about it.

You know, I was thinking the other day of what to draw. Maybe Jane and the dragon from Iron Dragon's Daughter. I tried to remember what she looked like, and couldn't quite do it.

That is indeed One Fine Cover. I'm envious as hell.
...and of course you're absolutely right, too, about describing the main character. Readers start forming the person immediately they arrive on the page, and only the critical details need be given (like, the character is 8 months pregnant...we need that one in the very first sentence. Withhold that for two pages and I will not like you.

From page 83 of the first edition: "Jane lived as a wood-may in a patch of scrub trees . . . she was a quiet creature, just coming of age, and a pretty one too, though she did not know that."

It surprised me when I wrote that line and discovered that Jane was pretty. But then, most young ladies are.

The subcontracting of visuals is surprisingly efficient. Gene Wolfe, who can describe things extraordinarily well, describes almost nothing in SOLDIER IN THE MIST, and I didn't even realize that fact until Latro reached Sparta. Being a great fan of Lycurgus, I was anxious to see what Sparta looked like -- and astonished that Gene didn't say.