The Literalization of Hieronymus Bosh 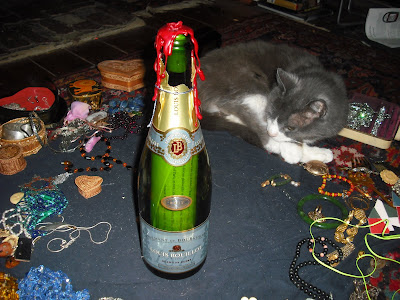 I've created another story-in-a-bottle!  It is the twelfth such I have ever made and the first since Moon Over Lubyanka, which I wrote for the KGB Reading Series auction almost two years ago.

For those who weren't reading my blog back then, here's what it's all about:  I write a piece of flash fiction, roll it up, and place it in a bottle.  Then I sign and date the bottle with a diamond-tipped pen, and re-cork it.  My wife, Marianne Porter,  seals the bottle with sealing-wax.

Then I destroy every other copy of the story, both physical and electronic, so that the story inside the bottle is, in the old unspoiled sense of the word, unique.  It is the only copy in existence.

The bottled story is then given away, along with a letter of provenance.  Copyright is withheld.  Whoever ends up owning the bottle can either read the story or own the object.  It is not possible to do both.

I'm going to be guest of honor at Conquest, held in Kansas City over Memorial Day weekend, the 28th through 30th of May this year.  During the convention there will be a charity auction to benefit AboutSF, a resource center for speculative literature, science fiction, and education that also coordinates volunteer efforts throughout the speculative fiction field.  They asked me for a contribution and this is what I came up with.

Since the theme of Conquest 42 is Steampunk & Evil Geniuses (hmmm . . . I wonder why they chose me to be their guest?), I wrote a steampunk/evil genius story titled The Literalization of Hieronymus Bosh. As a flourish, I placed it in an emptied bottle of Louis Bouillot Cremant de Bourgogle Blanc de Noirs (in any other country it would be called champagne; but in France it cannot, for it did not come from Champagne) with which Marianne and I and our friends (and dinosaur reconstruction artists) Bob Walters and Tess Kissinger toasted the completion of my new Darger & Surplus novel.

So this story has got provenance up the yinyang, as my old pal Jack Dann would say.

Here's how it opens:

Mad? Of course I’m mad. That I, Hieronymus Bosh, the greatest scientist ever to grace Kansas City, should find myself in such a fix! It would try the patience of a saint.

Quite different was my mood on the day when, having wed the power of steam to the subtlety of galvanic forces, I stood back from the gleaming brass-and-ebony workings of my newly-created Inference Engine. Here at last was a gateway between the real and written worlds, both factual and fictional. With it, I could plunge into the Russia of War and Peace, or the Rome of Gibbon’s famous history. I could discuss philosophy with Schopenhauer, stroll through Hemingway’s “movable feast” of Paris, or even (should I choose) seduce Helen of Troy.

My first requirement, however, was wealth . . .

Only rarely do I create these things, and roughly as often as I donate them to worthy charities, I give 'em to particular friends.  So if you want one, hurry on over to Conquest and bid.  You won't be getting a shot at another one anytime soon.

The contest to name my novel is now officially closed. I've finished the Darger & Surplus novel, slapped a title on it, and shipped it off to my agent.

So who won? Did anybody win?

It's too early to say.  The title is not the title until both writer and editor agree on it.  And at this point I don't even know who the editor will be.

But rest assured that nobody here will go the bookstore one day and have the rude shock of discovering that I've ripped you off.  Homey don't play that.  If I end up using your title and you were the first to suggest it, you'll get the acknowledgment.  And the Big Box O' Books as well.


Above:  The bottled story poses amid our cat Shadowfax's dragon-hoard.  Because a cat can't sleep well without extravagant wealth.

you are totally right "Crémant de Bourgogne" is a sparkling wine mainly composed of Chardonney or Pinot grape.
We have "AOC" that is strict guarantees of origin according to the region of the vineyards and Bourgogne is not Champagne even if it is excellent. Beautiful sceneries there...
I hope you enjoyed drinking it and I also wish it will bode well for the success of your new book.
I send you this link to a place called "l'Imaginaire des bulles"

Story in a bottle: luvs it! Thanks for cheese-sleuthing for me. Stinking Bishop will be mine.

"Homey don't play that." It's been a while since I heard that one...

Oh right, I was going to mention that you ought to just do what James Morrow did here in Seattle- he auctioned off a character name in one of his novels and gave the proceeds to charity. The winner was to have the character named after himself (or someone of his choosing I guess). I can't remember what it sold for in the end, I think it was around $300 or so.

That's got to be a lot more easier that the message in a bottle thing, but probably not as fun or crazily enigmatic.

I bet someone out there would pay a few hundred to have, say, a anthropomorphic genetically engineered armadillo or something named after himself.

"I placed it in an emptied bottle of Louis Bouillot Cremant de Bourgogle Blanc de Noirs (in any other country it would be called champagne ..."

Really? I'd thought it was only in the USA that people thought that Champagne came from anywhere other than Champagne, "domestic Champagne" & "French Champagne" being expressions met with bewilderment here in (traditionally Europhobic) Blighty.

Certainly, the rule in France is likely to be the rule across the EU. See also Parma ham and--controversially--Stilton cheese.

Of course, a "gentlemanly" restraint in the abuse of terms implying origin is one thing, passing laws to enforce (and sometimes to distort) usage is another, and I do not here endorse any such.

More interestingly, it seems that even the traditional use of "méthode Champenoise" has been restricted by the EU:

One wonders whether the (official) Champagne region will one day mysteriously expand to maximise profit.

If one purchases the story, will the variant spelling of HB's name become significant?

For those interested in coming to ConQuesT, it should be noted that the membership price will be jumping from $45 to the at-the-door rate of $55 as of May 1st. Memberships can be acquired at www.conquestkc.org through PayPal.

I am looking forward to meeting you at ConQuesT, and thank you for this wonderful donation to the auction.

You know, I would love to do something like this. Do you hold a trademark on the story as objet d'art, or am I free to "borrow" (by which I mean steal) your idea?

I've had Spanish champagne and I think South African champagne and seen Canadian champagne (but was not mad enough to drink it) and the first thing a true friend will tell you in Russia is, "Don't drink the Georgian champagne." So, yes, there is far too much fauxpagne in this world.

Only in France would they make a sparkling wine worthy of the title and not allow it to be called such because it wasn't properly from Champagne. God bless the French for making such a terrific wine available at such an affordable price!

When Marianne and I celebrated our 25th anniversary we celebrated with a party and a case of Louis Bouillot Cremant de Bourgogne. A very fine wine indeed.

Genovefa, thank you for the link.

Whoops. ConQuesT. I've been capitalizing it wrong. Damnably careless of me.

Pat, my inspiration for the bottled stories was all the art bottles made by surrealists, coupled with a frustration with all the art books contemporary artists make which are exquisite visually but fall down on the textual level. Since the surrealists didn't limit the bottle idea to one artist, I don't see how I can morally limit my idea to one writer.

Plus, ideas can't be copyrighted. If I were dead set against you doing the same (which I'm not), the law would be on your side.

Plus, what the hell. It's fun. The world can use more fun.

If you want to make me happy, somewhere around the fifth bottled story you make, begin one with "Because that bastard Swanwick wouldn't let me make a bottled story, I . . ."

"Only in France would they make a sparkling wine worthy of the title and not allow it to be called such because it wasn't properly from Champagne."

But the name "Champagne" is not a mark of excellence, just of combined type and origin.

Break the spell of the name, and the "this name is ours" lobby will lose all its power. Of course, by then, nobody will care ...

But Matthew, in the USA, Champagne does come from other places, and isn't even wine. I offer as Exhibit A, that fine pilsner, Miller High Life - The Champagne of Bottled Beers. It doesn't come from Champagne or Plzeň (or even Golden Colorado).

In The States, we like to hoover up terms like Champagne. You could try to put a pedantic band-aid on the problem or pour kerosene in your ears, but its really just a down-escalator to genericide.