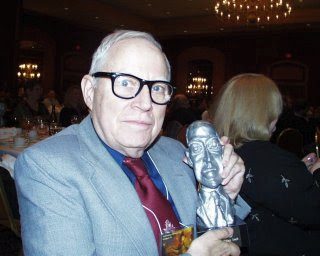 George Scithers died yesterday.  George was a man of many accomplishments.  His Hugo Award-winning fanzine Amra introduced the term "sword and sorcery" (reprinted from an obscure fanzine with almost no circulation) to the world.  He edited three major magazines -- Isaac Asimov's Science Fiction Magazine, Amazing, and Weird Tales.  His Owlswick Press published literary jokes like the Necronomicon (in untranslated form; the Arabic-looking text gets larger and more rushed as it moves toward its abrupt end) and To Serve Man, a anthropophagic cookbook (which he wrote himself under a pseudonym).  It also published some beautiful and even essential books by writers like Avram Davidson and Lord Dunsany.  He chaired a Worldcon.  He won a World Fantasy Lifetime Achievement Award.  Robert Heinlein's Glory Road was written in response to a postcard George sent him, saying in essence, "Okay, the hero has slain the dragon, won the princess, and saved the kingdom -- NOW what?"

George marched to the beat of a different drummer.  He had the bearing of a career military man (which he was for a time), the fashion sense of an engineer (he almost always wore plaid jackets), and the passion of a trufan.  He liked adventure fiction a lot, but equally admired the work of Gene Wolfe.  He had enormous energy and boundless enthusiasm.  He had no tolerance for fools, but to everyone else he was extraordinarily generous.  He encouraged young fans who wanted to get into publishing and were willing to work hard by giving them jobs as slush pile readers and then moving them up as fast and as far as their talents would take him.  As an editor, he promoted writers he thought talented with tremendous vigor.

I don't think there will ever be a true accounting of everything George Scithers did.  For decades, he was everywhere and did everything and claimed very little credit for it.  You never knew where he was going to pop up.  I remember vividly opening the paper one morning and seeing a cartoon with the byline, "A tip of the Hatlo hat to George Scithers."

And let us not forget tram cars (a.k.a. street railways).

George Scithers championed the work of Avram Davidson at every stage of Davidson's life and also his posthumous career. Scithers was generous with his knowledge and encouraged the undersigned to persevere in his efforts to promote appreciation of Davidson's writings. He also gave some sound, simple advice about small press publishing contracts.

"Homophagic"? I wag my finger at you, sir!

What was wrong with the thoroughly Greek "anthropophagic"?

(As it is a cook book, I guess you're not punning on omophagic.)

Correction made, Matthrew. The only excuse I have is that George's death upset us all.

Anthropophagy is a a lovely word. Though it comes in second to the late and lamented Jim Turner's usage in one of the Arkham Press volumes, which went something like, "Before Lovecraft, opportunities for batrachiophagy were rare."

And, Henry, how could I have forgotten to mention George's learned and loving appreciation of streetcars? He was an engineer for SEPTA, which still has the beautifully anachronistic Sub-SUrface Line.

George did a lot of good, and he is sorely missed.

Well, I certainly hope I didn't add to your upset.

The French have been famously batrachophagous since before Lovecraft's time, have they not?

I suspect that--knowing that I am an pedant--you're trying to lure me into complaining about the "i" in "batrachiophagy", but unless I've already bitten, I am not going to bite.

Oh, bugger. That was a typo.

I believe it was Guy Davenport who wrote, "We are never so sure of ourselves as when we are wrong."

Sadly, although through years of hard work, I have achieved a vanishingly low level of self-confidence, I have nonetheless failed to reduce my error rate.