Planet of the Authors 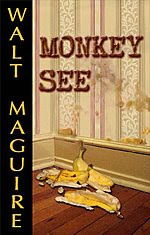 I just heard from my old friend Walt Maguire. Some thirty years ago, I was his dotted-line supervisor at the National Solar Heating and Cooling Information Center (NSHCIC -- motto: "What's a NSHCIC like you doing in a place like this?"), itself a dotted-line agency answerable to both HUD and DOE.

Back then, Walt and I were both unpublished writers, given to staying after work so we could use the Selectrics for our own work. Walt wrote plays and me . . . well, I became a science fiction writer and was never heard from again.

Anyway, Walt's got a book coming out this summer! Monkey See, which he characterizes as light reading (but that may just be him; Walt is a modest and self-deprecating guy; he probably meant to say "hilarious and fast-paced") is forthcoming from ENC Press (pre-order price $11).

You can read an excerpt here. Or you can download a podcast of the excerpt here. Plus, there's a picture of Walt looking authorial as hell here.


But, c'mon . . . talking apes? Where does he come up with these crazy ideas?

Hmm, I wonder, was Mr. Maguire inspired by that Avram Davidson story about the talking monkey? Do you think he ever read Avram Davidson?

OK, maybe it's wrong to assume that that is the first or even best-known SF story about a talking monkey.

I always assume that all intelligent people -- and Walt is an intelligent man -- have read Avram Davidson.

That said, there are a LOT of intelligent talking monkey stories out there. One of my favorites ("Will" by Mario Milosevic) isn't even published so far as I know. So there could be any number of inspirations there.