A Day at Bombay Hook 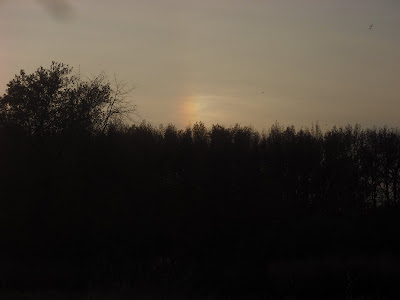 .
As always, things are busy here, and so I haven't yet gotten my crack tech crew (Sean) to restore the driver for my scanner, and so I can't show you the diagram for the chapter I'm currently at work on.  Monday for sure!
Last Tuesday Marianne and I drove down to Bombay Hook, a major birding hotspot in Delaware, to look at the snow geese.  And there they were, flickering through the sky in vast flocks, covering the ponds like drifts of snow on still land, making a gabble like New York City at rush hour.  People who speak of the silence of nature don't get out enough.
There were also many, many harriers, a sufficiency of great blue herons, and all those pintails and shovelers and black ducks and such that Marianne's nuts about.
A lovely November day -- and on the way out of the reserve, there was a sunbow!  I took many shots with my dinky little $120 camera, of which the best was the one above, showing the rightward arc, where it touched the horizon.
So those who say nothing ever happens in Smyrna, Delaware, are wrong.  Just this week they had a sunbow.
And as always . . .
The Poem du Jour has been updated.   This time, I discuss "Three Metafictionally Blind Recursive Mice."
*
Posted by Michael Swanwick at 7:29 AM