The Best Panel at Philcon 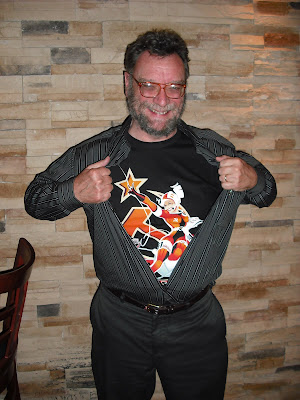 .
You missed the best panel at Philcon.  I know because pretty much everybody else did.  It was the Tom Disch memorial panel and it was held at 11 a.m. on Sunday morning, a time when nobody's in the mood to think about newly-dead writers.  Plus, it was up against ten other panels  -- at eleven in the morning!
Which is why when the panel began, there was only one person in the audience.  I don't think the number ever got above six.
Now, the rule is that when the number of people on the panel exceeds the number in the audience, the panel is empowered to adjourn to the bar and continue the discussion over drinks.  But it was eleven o'clock on a Sunday morning.  So Gardner Dozois and Lee Gilliland and Darrell Schweitzer and I just reminisced among ourselves about Tom and his accomplishments.  About his poetry and his novels and his stories.  About the early video game he wrote.  About how "The Brave Little Toaster," a story dripping with sarcasm, became a Disney cartoon.  About his libretto for an opera based on Frankenstein.  About his very first story, "Descending," which we all agreed was one of the most terrifying stories ever written. About...
Well, it just went on and on.  We didn't even get around to his light verse explaining grammar, which is a personal favorite of mine.
So you missed a great discussion.  It wasn't your fault, but it is a pity.
If I can find the doggerel I wrote in praise of Disch's grammar poems, I'll post it here later in the week.
Oh, and the picture?
That's me wearing my new "Kosmonaughty" t-shirt.  I don't normally wear t-shirts.  But for this image, I was willing to make an exception.
And as always . . .
Poem du Jour has been updated.  This time, a poem by a guy who was "Fat, Jewish, Gay -- and Way Cool."  Enjoy.
*
Posted by Michael Swanwick at 6:43 AM