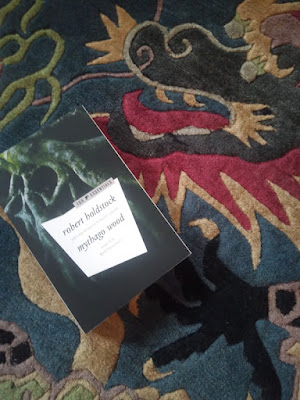 Look what came in the mail recently! It's a copy of Robert Holdstock's classic work of maybe-fantasy/maybe-SF, Mythago Wood, which has been reprinted as a "Tor Essential."

This is a terrific book which I strongly recommend to all intelligent readers. And I got it for free because I wrote the introduction. Here's the very beginning of it:

Decades ago, my wife and I were motoring in Scotland, our first time in that country, when we saw a historical marker for the Birnam Oak, a 600-year-old survivor of the forest made famous by Shakespeare’s Macbeth. Naturally, we pulled over. Following a dirt path down toward the River Tay, we came upon the oak—enormous and imposing but feeble with age. Its heart was hollow and its lower branches were propped up by wooden supports. A class of preschoolers was being urged to clasp hands and form a ring around its trunk by their teachers. They were small and beautiful, boys and girls alike. A Victorian would have had no difficulty calling them fairies. It took all of them to encircle the tree.

A minute later, the ring was broken and the children were led away. Without them, the woods seemed empty and the Birnam Oak forlorn.

After which I go on to discuss the influences of birthplace on writers, Holdstock's biography, the Mythago series, the one time I met the man, and very much more. It's a good introduction if I do say so myself.

But it's a much better book.

Posted by Michael Swanwick at 2:04 PM

I am fortunate to possess a signed first of that beautiful novel. I'd tell you how much I love that book 'but that is for another time, and another people.'