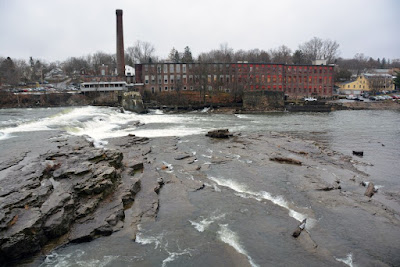 So. When I lived in Winooski, Vermont (1959-1967) there was one Black family in town. I know this because somebody went door to door with a petition to (somehow) force them out and, after that person came to our house was the only time I ever saw my father angry when I wasn't at fault.

Despite the fact that long ago (cool fact!) a Buffalo Soldier retired in Winooski, it was as white a town as you've ever been in. Much of that was due to the fact that Vermont's population peaked in 1820. So there was no reason for to go there looking for a better life. Winooski High had exactly two Black students, a boy and girl (the racists hadn't intimidated their parents away), and you couldn't get anywhere near them, they were so popular. (Even then, it was important to have a Black friend so you weren't racist.)

There were more Black folks locally, though I had no idea where. A couple of kids shined shoes outside City Hall (and I envied them their ready cash). And every Fourth of July, there was a parade with lots of high school bands and one Black band that put them all in the shade. They played better and jazzier than the white bands, while doing dazzling synchronized dancing/marching. I was awestruck.

Years have passed. In 2012, a hip-hop trio, all refuges, titled A2VT created a video, Winooski, My Town. The three are: Said Bulle from Somalia and Kenya, Cadoux Fancy from Republic of Congo, and Geworge Mnyonge from Tanzania. Things had changed. They were only a part of the Black community in my home town.

I know every place in the video from the soles of my feet to the core of my heart. The song is the best and only song praising Winooski I know. It speaks to me. And it was made by immigrants.

Here's the video. I defy you not to be made happy by it. Click here.

Posted by Michael Swanwick at 6:37 PM