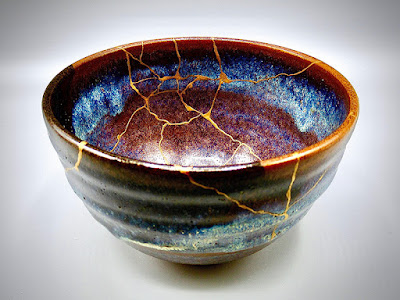 L'esprit de l'escalier, or "spirit of the staircase," as you probably don't need to be told, means that moment when you're on the stairs, leaving the party, and you think of the clever thing you should have said in a conversation but didn't.

Recently, I was on a convention panel on old women in science fiction and the moderator, C. S. E. Clooney, loosening us up beforehand as a clever moderator does, posed a question: What would a thousand-year-old woman be like, compared to a hundred-year-old one? Which was an extremely good question, as witness the fact that the rest of us had no answers whatsoever. We none of us had ever thought on the matter.

Claire didn't ask the question during the live panel (thank you, Claire!), but musing on it afterwards, it occurred to me that in our relatively short lifespans we all of us suffer a great deal. We lose people we love, have health problems, do things we later regret. Someone who lived a thousand years would suffer correspondingly more. She would be a profoundly damaged individual.

So I think our hypothetical thousand-year-old-human would be like a kintsugi bowl.

Kintsugi is the art of repairing broken pottery or crockery with gold. The result is a piece that highlights the damage done to the original while making it more beautiful than before.

The image of a kintsugi woman pleases me greatly. And, of course, having come up with the image, I found that someone else had beaten me to it. The above photo is taken from an article in The Tyee, written by Dorothy Woodend, which uses an art gallery installation as a jumping-off point for a meditation on kintsugi as both an art form and a more than metaphoric means of healing.

You can find the article here. It's well worth reading.

Kintsugi is a celebration of transience and fragility. So our thousand-year-old woman, formidable as she would doubtless appear to you and me, would be aware of how small she was in the face of the universe, how brief her life in the face of eternity. I think she'd be fascinating to talk with

I'm just sorry I'll never get to meet her.

Posted by Michael Swanwick at 7:38 AM

You may, of course, already have met her--just 900+ years before she is the woman she will become.

Is there a difference if there is only one--think Doctor Who--or many (say, 1 out of 500 people) but not most people, with no clear reason for the duration?