A Requiem for Old Bessie 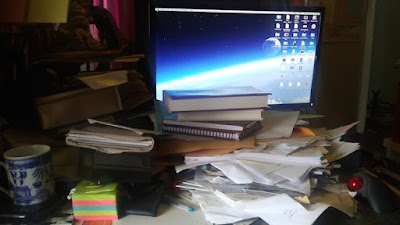 For years and possibly even decades, whenever I chanced to post a picture of my office, people would ignore the ostensible subject of the post and exclaim in horror,: You're still using a CRT monitor?!

But think of all the extra space you'd have if you bought a flat screen instead.

Well... As it turns out, things are as mortal as people. Old Bessie (a name I gave the CRT monitor posthumously when I realized how much I was going to miss it) died and I had no choice but to get with the times.

And now look! My desktop, which had earlier been merely cluttered, is now a parody of itself. There are books and notebooks and office supplies on top, a tin box I used to gather up I forget what (for neatness' sake), half-written stories, a printout of someone else's novel, magazines, CDs and mini-CDs, an orange 3.5 inch floppy disk, and look here! a letter from Gene Wolfe.

I'm afraid to dig any deeper, list I find old obligations, safely forgotten long ago, and realize I still have to deal with them. But clearly, Old Bessie, by taking up so much of my desktop, was imposing a degree of neatness that the newcomer, slim and sleek as it is, simply cannot. There's a moral here, and I think we all know what it is:

Never tidy up. It just makes more room for clutter to accumulate.

Posted by Michael Swanwick at 8:44 AM

Never tidy up, you say, and for years I've followed that exact advice without knowing you'd ever uttered it. Yet the other day, a co-worker posted a photo of her desk with her snazzy new monitor on it. Unlike the desk I'd seen in her online meetings for the past year, this photo was of a clean, neat, even I dare say tidied workspace. Horrors, about 20 minutes later another co-worker posted a photo of her newly neatened work surfaces. I had to follow suit. I gently moved the piles from my desk to balance them atop the piles on the neighboring bookshelves and file cabinet--taking great care not to disrupt the system of geologic layering within.

I must've been feeling ill because the desk remained clear through most of the afternoon, not even approaching its former glory until the next afternoon.
Therefore, rest assured this photo was very deliberately staged: Uncharacteristically tidied desk.

Welcome (kicking and screaming, I understand) to the 21st century!

Were I you, I'd scan that letter from Gene for digital safe-keeping and perhaps to share with posterity.