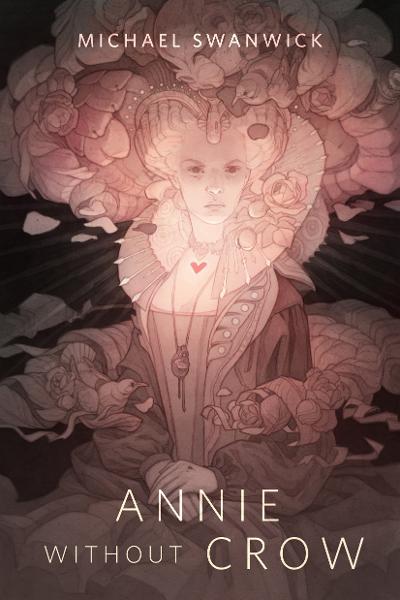 I have a new story coming on Tor.Com, this April 7! That's the title and the cover illustration up above. The artist was Wylie Beckert. Who did, I think you'll agree, a great job of it.

Yes, "Annie Without Crow" makes "The Raggle Taggle Gypsy-O" the first story of a series. No, I don't expect there to be any more . It's a two-story series.

Here's how it came about:

Years ago, Ellen Kushner and Delia Sherman came to the Main Line for a reading. Marianne and I of course went to listen. Afterward, Ellen hit me up for a story for an anthology she was hoping to sell of fantasies based on border ballads. She suggested a few possible titles.

"None of these really sing to me," I said dubiously. "But if you can come up with two vivid images that don't fit together, I'll give it a try." This is the way I write.

Alas, Ellen couldn't get into the game. It's not the way she writes. But on the way home, I said to Marianne, "One element is a trailor truck full of Deinonychus. What's the other?"

Quick as a flash, Marianne said, "A basket full of dead puppies."

"I can write this bastard!" I crowed.

And so I did. "The Raggle Taggle Gypsy-O"was the story of how Trickster fell in love with another man's wife and the price he paid to win her. I like the story a lot. It has some rough moments, but it's romantic.

But it bothered me that, though Annie is, in the story, obviously worth everything that Crow goes through for her, she never really got to show how ruthless she could be in her own right. Hence, "Annie Without Crow."

At the end of the first story, after all, Annie became an Avatar and a particularly dangerous one at that. She's nobody you'd want to cross.

But odds are you already have. When you read the story, you'll see what I mean.

Gee, I don't know. The next time I see someone from Tor, I'll have to ask.