The Brilliance of Gardner Dozois (and Other Topics) 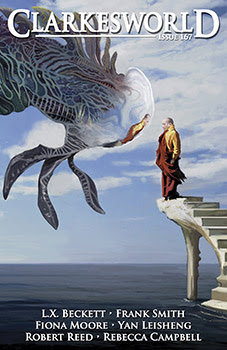 The new issue of Clarkesworld has an interview with me, capably conducted by Arley Sorg. In it, I talk about the brilliance of the late Gardner Dozois, our collaborative novel City Under the Stars, how to stay relevant as a writer, and why there should be a sign by the womb-door reading  HEROES ONLY.

Among many other topics.

It bears repeating that Dragonstairs Press is Marianne Porter's micropress and not mine. She is the sole founder, operator, editor and publisher of the Dragonstairs empire. I'm only the content provider.

That said, you're probably wondering how the rollout of Swan/Wolfe, Marianne's latest chapbook, the lightly-edited transcript of my interview on the ReReading Wolfe podcast went.

Not so badly. Marianne made 100 copies of the the signed-and-numbered, hand-stitched, and beautifully-made chapbook, of which 76 were available for sale. Every one sold by the end of the day.

Of course, it was a Gene Wolfe related item, which means that a year from now it will be fabulously expensive--assuming you can find someone who wants to part with it. But Marianne is already at work on her next project, which I'm absolutely sure is going to sell out in less than an hour.

But it's still too early in the process to drop hints. For now, mum's the word.

Posted by Michael Swanwick at 2:25 PM

Corrected url for the interview:

Have pre-ordered your book with Gardner, and just ordered a print copy of the salient Clarkesworld issue.

Thank you, Hannah's Dad. Correction made.

And thank yo, DanP.

You, not yo. Sheesh.