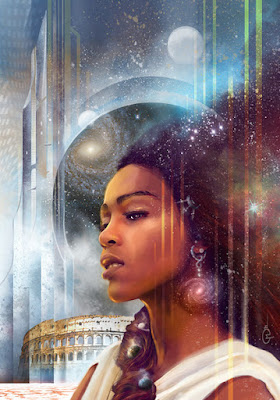 "All of the drawbacks of being a writer are financial." I said that in a Liars Club podcast. Those are true words and I'm sticking to 'em. But the perks and advantages are manifold.

One of the best of these is getting a beautiful --and perfectly apt -- cover illustration for a novel or story. As has just happened to me. My latest story, "Starlight Express," appears in the newest issue of F&SF and look at the art that was commissioned for the cover.

The story is set in the ancient city of Roma, far in the future. Flaminio, a young nobody who works as a water carrier, happens to be present when a beautiful woman climbs down the steps from the Astrovia, the matter transmitter that once enabled human passage between star systems. Only that's impossible because the Astrovia has been broken for many thousands of years.

Here's what Maurizio Manzieri, the artist, had to work from when he painted the woman, Szette:

Where Flaminio had the ruddy complexion and coarse face of one of Martian terraformer ancestry, the woman had aristocratic features, the brown eyes and high cheekbones and wide nose of antique African blood.

All of which you can see in Manzieri's painting. Which also establishes the setting of Rome, includes a ghostly Astrovia, and establishes Szette's possible extraterrestrial origin with a scattering of stars  and planets and the earring (jewelry plays a crucial part in the story) with the Milky Way pendant from one lobe.

You can see why I'm so happy with Manzieri's painting. But it's even better than you know, because he also painted Szette's character into her face. If you read the story and then look at the cover again, you'll see what I mean. The gist, the essence of "Starlight Express" is captured in her expression.

But if you want to know what I meant by that, you'll just have to read the story. In the September/October issue of The Magazine of Fantasy and Science Fiction. You can buy it on the news stand soon.

The magazine's website, for those of you who can take a hint,  can be found here.


And if you're a gonnabe writer...

The quotation above, and an earlier reference to the fact that Szette's gown "slid across her body with simple grace," are the totality of what I wrote about her appearance. Not a word more was needed.

And in fact, because Szette's beauty was necessary for the story, I spent more time describing her than I usually do for a character. Because, really, the reader is on your side. They're perfectly willing to do half the imagining for you.

Your writing advice has undergone a quantum leap in terms of usefulness, when compared to the old Ask Unca Mike days.

All you had to do then was the exact opposite of what I said and it worked fine.

As writer I understand completely your mood discovering such a cover, really Maurizio had a great sensibility catching your story in this picture. Unfortunately in magazine version the bar code hides completely Coliseum on low left side of the image... pity!

Absolutely beautiful cover. Your post was the impetus for my subscribing to F&SF albeit as e-books. This issue is gracing my tablet right now.

Still reading that issue and enjoying it a lot. Delany's story is terrific, though it does take some mental effort.

Bought it. Read it. Thank you - it gave me great pleasure.

Michael, I loved the cover illustration and the story equally, as I posted on my Facebook page. Both are lovely and moving. A question: Is the world you set the story in part of larger fictional universe you've written about? If not, it should be, because I want to know more about it.