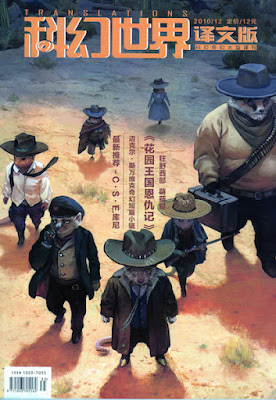 Posted by Michael Swanwick at 11:29 AM

Michael -
Would you like to write a story for the next MIT TWELVE TOMORROWS science fiction issue?
Pay would be $5,000, since we’re looking for approximately 5,000 words at $1 per word.
I know you've got your head down on your next novel and need to stay with that. That said, when I was asked to take a hand in editing this one, the first author I said I wanted to get a story from was you. Delany is already onboard for this issue’s interview (the last one we did was Gene Wolfe, which you liked), so you’ll be in good company there.

I've left my MIT email address via your 'contact' page on your main site and my gmail here, too, I guess.

According to their site, SFW Translations started in 05 as a supplement to SFW, but now it is a standalone monthly publication.