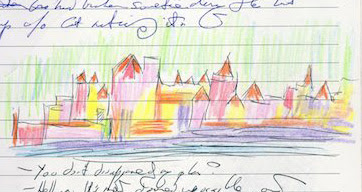 We have been, you and I, writing a story online. As you will recall, so far it has almost 250 words and a tentative title -- which will likely change when we figure out what the story's about. But right now, we're set on making a good beginning.

Here's the story so far:

The city had been frozen in time. The moon hung, a thin disk of ice, as unchanging as the afternoon sun. Birds were motionless specks in the sky. You could climb the smoke billowing from its chimneys halfway up to heaven and there, perhaps, discover an unimaginable nation living on the clouds just an hour's effort above the mundane world.

Gehenna Immaculata stared at the city from the vantage of the topmost branches of the tallest oak in the adjacent forest. She had no history or philosophy or even peasant morality to help her put what she saw in context. She was illiterate.

She only knew what she wanted.

So far, we have a tableau. Now let's move this into the realm of fiction. Last week, I asked what Immaculata wanted and as of when I sat down to write, got no suggestions. So I made her desire as basic as I could:

Hunger drove Gehenna down the tree almost as fast as a squirrel, despite her many aches and bruises. Luckily, no bones were broken. So the only disability she suffered was pain -- and pain was hunger's handmaiden.

From the ground, the city was invisible. But Gehenna had noted that if she lined up a nearby beech with a distant stob, she could follow that line straight to its heart. Not half an hour later she burst free of the forest.

I've been so busy of late that I've even missed a couple of my regularly-scheduled posts. So I haven't rewritten the above. But the sharp-eyed will note that I changed "staub" to "stob," which is the correct spelling for the thing. (It means stump or stake or post. Though in this context, it's deead, almost branchless tree, which was what the State Historical Archaeologist of Delaware was pointing to the first time I heard the word; presumably, the usage is regional.)

For those of you following this series hoping I'll let drop some casual writing advice, here's a tidbit: At some point before you declare a story done, you should look up all the odd words you use in it. Don't trust your memory. Odds are, you picked up the word in your voluminous reading and never thought to run it past a dictionary.

There's a good chance I'll write the word out of the final draft. But for now, we'll let it stand. This is a fantasy and fantasies can withstand odd and archaic words better than most fiction.

I'll post new material soon. Possibly tomorrow, Wednesday at the worst. Right now I'm working on the Novel and getting so much done that my shoulders ache and my brain hurts. So, although I know what I want to add, I simply don' have the time and energy to add it.

Out of politeness, I apologize. But, really, the novel has priority. My agent could explain this to you.


Above: Illustration by me. Now you know why I'm not in the visual arts.

Posted by Michael Swanwick at 12:50 PM

Re "Illustration by me. Now you know why I'm not in the visual arts."

Hey, I kinda like it. Pass it along to whatever market buys the story. Maybe a the real artist will be inspired....

All you need to do is install it inside your WordPress website and point it towards a page and your shop will be deployed.
woocommerce development services

In fact, mobile app development services become so popular for every business. Mobile market is flooded with mobile apps giving lot of options, if mobile app fails to deliver the best, then it would be thrown out of the market.
ios app development