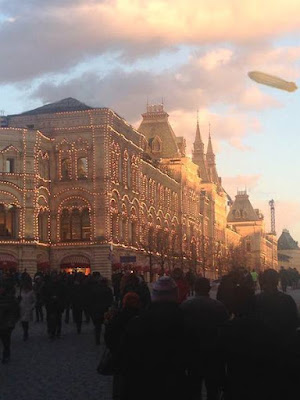 I promised to write a little about my four days in Rublevka and Moscow, where Roscon, the Russian national science fiction convention, was held, and though I'm still a little jet-lagged, I'll do my best.  It was a great experience for me. The Russian fans and pros were all warm and welcoming The parties were fun. I won an award (see yesterday's post). And they made such a big fuss over me that I'm going to have to lie down in a dark room with a damp cloth over my ego until the swelling goes down.

Roscon is divided into two separate conventions. Thursday and Friday there was a literary convention of writers, editors, and serious fans, very much focused on the written word. This half was held in a hotel in Rublevka, which is where the wealthy and powerful lived in gated communities. Saturday and Sunday there was a more populist media con held in Moscow. This is a new but very successful addition to the original conference.

Here, off the top of my head are a few of the highlights:

Shish-kabobs on Thursday evening. This event was held in an open-air pavilion surrounded by birch trees and snow. The meat was grilled to perfection and there were drinks on hand. Boy, were there drinks on hand. Whiskey appears to be almost as popular as vodka and there was, of course, kvass. Like any science fiction event anywhere, the focus was on conversation. Imagine a torrent, a tumult, a babel of voices. Then add alcohol. Quite enjoyable.

The Friday night whiskey tasting. Actually, it wasn't just a tasting but a lecture as well. Andrei Sinitsyn explained the qualities and merits of each bottle before samples were poured. This has become a tradition at Roscon in recent years. In addition to the single-malts that are the backbone of the series, they one Irish whiskey, Writers' Tears, and a bottle of Rittenhouse Rye. Which I don't have to tell you is made in Philadelphia.

Interviewing Sergei Lukyanenko. Sergei is best known in America for his six Night Watch books, but he's written a great deal more as well. Also, he's one hell of a likable guy. Alas, our schedules were so crowded that the only chance I had to interview him was in a very noisy room. I'm hoping I'll be able to transcribe the results without too much difficulty. "How long did it take you to get published from when you started writing?" I asked him.

Meeting Annushka, who spilled the sunflower oil. The media-focused part of the con had, of course, many young people in really good costumes. I was wandering among them when a young woman carrying a pitcher and several packets of sunflower seeds asked if I was familiar with Mikhail Bulgakov's novel, The Master and Margarita. Then she explained that she was Annushka, the woman who spills the sunflower oil upon which the editor Berlioz slips, sending him under the wheels of an oncoming trolley. Just minutes after the devil predicted his imminent decapitation, at the beginning of the novel.

It turns out that there is a Moscow group of M&M fans and cosplayers dedicated to that great work of literature and they had a display set up at the con. As if I needed another reason to love Russians!

A panel with Sally Green and Nick Perumov.  Ms Green is the author of the very popular Half Bad YA series and Nick's books have sold millions of copies worldwide, though only one title has been published in English. It was held in English and about half of the audience knew the language well enough that they didn't need wait for the translator to have a full understanding of what we all said. Nick, oddly enough, was made the moderator/interviewer, but he managed to slip in some of his own ideas via the questions.

The room was pretty much full -- and this during the media half of the con. The Russians remain ahead of us on the reading front. Our government should probably fund a massive program for us to catch up.

Fiction Writing Contests. There were several. I was volunteered to enter the Write a Story in an Hour contest, and I managed to do so -- just barely. When the story is posted online, I'll blog about it in more detail.

Hanging With the Esli Editorial Staff.  I've had a number of stories published in Esli (the name means "If") over the years, and it's always been a pleasure. The magazine closed in 2012, due to distribution problems, but re-opened last year and looks to be going strong. This is a good thing. Every time I receive a contributor's copy of the magazine, I look over the stories I cannot read and sigh with longing.

The Sunday night banquet. It was zakuski, basically. Lots and lots of little plates of favorite foods, the sort of things that Russians eat at home. Accompanied, of course, with conversation. Among the many people I met there was a professional sports-fisherman -- the best in the world, his friend said proudly. I, being quite possibly the worst fisherman in the world, experienced a moment of fear when we shook hands, that physical contact would cause us both to cancel each other out.

And there was much, much more. I'll most likely write more here soon. Right now I have to see if I can do something about this jet lag. A nap may well be involved.


Above: GUM Department Store as seen from Red Square. I was fortunate enough to walk through the Resurrection Gates at the exact moment when the light was perfect. The airship is by the quite wonderful Tom Kidd. It was photoshopped in by Sarah Smith. The image is posted here with their permission. my own, of course.

Thanks for the report!

--
Q. What do Catherine the Great and Smokey the Bear have in common?
A. They have the same middle name.

What a fabulous experience. So proud of you for winning the RosCon award. My ego also swelling, reflectedly!