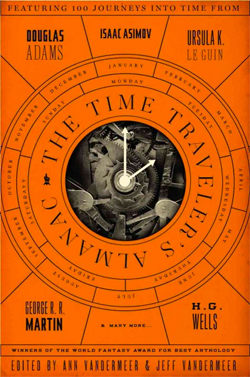 I'm in print again, and as always happy to be so.   This time it's in The Time Traveler's Almanac, a whomping big book of stories about... well, time travel.  It includes my story "Triceratops Summer,"which is set in and near the Winooski of my youth and is about the kind of people who lived there.  Were there really dinosaurs in Vermont when I was young?  Oh, yes.

All of which got me to doing a little mental time travel back to when I was first starting out as a science fiction writer.  I was visiting Jack Dann, who lived in Binghamton, York, back then, and we were talking about this, that, and the other thing.  Jack pointed to a set of bookshelves, floor to ceiling, and most of it crammed with his books:  Novels, collections, and anthologies containing first appearances or reprints of his stories.  "When I was a new writer like you, Anne McCaffrey pointed at her bookshelf and said, 'This is what yours will look like one day.'  It's a clock, and it will measure out the rest of your life."

At that time, I had a shelf of five or six books and magazines.  Now I have a wall-clock, with row after row of novels, foreign reprints, best of year volumes, magazines... all of it measuring out my life tick by tock, book by magazine.  Sometimes I look at it and it seems I can see it growing.  You're making good time, it seems to say.  Keep at it.

Back then, the monster library Jack had of his own work seemed so very far away.  Now it's only a few steps from my keyboard.  I pick up The Time Traveler's Almanac and add it to the shelf.