Of Finest Scarlet Was Her Gown 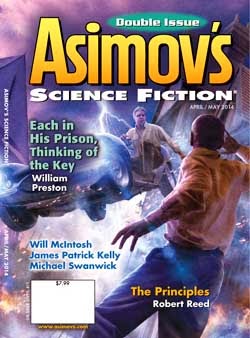 I'm in print again and so I am happy. "Of Finest Scarlet Was Her Gown" appears in the current (April/May) issue of Asimov's Science Fiction, along with what look to be a very good array of fiction by writers I like.  Including fellow Philadelphian Fran Wilde, making her Asimov's debut.

I say "look to be" because it's a working day and I haven't read any of the other stories yet.  But I do note that Fran understands titles.  Her story is called "Like a Wasp to the Tongue."  Try getting that one out of your mind!

My own story is about a girl named Su-yin whose father is taken away by the Devil.  So of course she follows him to Hell to get him back.  Alas, not only is Hell an unpleasant place, but she's forced to go out on dates, as part of her own personal deal with the Devil.

Will Su-yin triumph?  This is a Michael Swanwick story!  Of course there'll be a happy ending.


And on a completely different subject . . .

Three of my friends are up for an Audie Award -- and in the same category, Multi-Voiced Performance.  Janis Ian is one of the performers in Ender's Game Alive, an adaptation of the Orson Scott Card science fiction classic, and Ellen Kushner and Delia Sherman are up for The Fall of the Kings, an adaptation of Ellen's fantasy classic.

The fourth friend is Gardner Dozois, whose audio anthology Rip-Off! is up against the Ender's Game adaptation.

You're the best, Michael. I'm thrilled you like the title!

Yellow jackets are, in fact, a species of wasp. I only point this out because I once was stung by one. On the tongue. It was horrible. I'll tell you about it someday if you want.

I expect it hurt, JL!

It is doubtful that anyone here was bitten by as many hundred wasps as I was one summer day in my youth, back in Winooski.

My max is three stings, with an infected stinger. And a bunch of bites. Wasps are mean.

Thank Goodness that was before the Winooski Gene Mills got into the Tracker Jacker business.

I once ate a bee (by accident), while eating a peanut-butter sandwich, my field lunch that day. Stung me on the tongue. A memorable experience.

It tasted bad, too.