The Easy Way To Win A Major Science Fiction Award 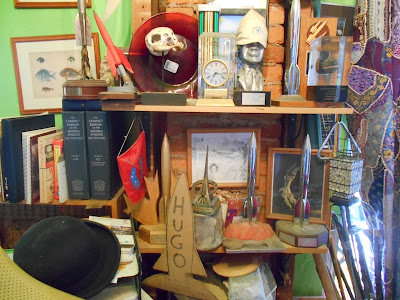 I may have told you this before, but what the heck.  It bears repeating.

I know you guys want to win major awards.  Well, there's an easy way to do so.  And it involves only two steps:

1.  Become a good enough writer to deserve the award.

There's no getting around this one.  Occasionally a clunker lucks its way into a Hugo or a Nebula, but that's actually pretty rare.  Anyway, you want to be recognized for being a good writer, right?  Not for being a mediocre writer with astonishing luck.

Got that?  Okay.  Now, the reason you want to write a novellalla is that there's less competition there than in any other category.  The single most competitive category is Novel, simply because there are so many of them published every year.  The second most competitive category is Novelette, because the form gives writers the freedom to develop an idea at some length combined with a plenitude of market slots available for the story.  So many very good writers have a particular fondness for that length.  It takes more skill to write a really splendid story in the Short Story category, so that's less competitive.  But there's still a lot of good writers working in that form.

It's as simple as that.

You're welcome.  Don't forget to thank me at the awards ceremony.


Above:  Some of my awards.  The cardboard one isn't a real Hugo.

Posted by Michael Swanwick at 7:52 AM

Thanks. I am going to get right on it.