The Dark Side of Being a Writer 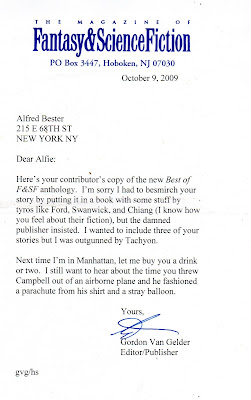 In the mail yesterday was my contributor's copy of The Very Best of Fantasy & Science Fiction, fresh out from Tachyon Publications to celebrate the 60th anniversary of F&SF. And there I am! Alongside the likes of Harlan Ellison, Ray Bradbury, and Kurt Vonnegut. These guys are the heroes of my youth, to say nothing of being icons of American literature.

Are you impressed yet? No? Then let's look at individual story titles: There's Shirley Jackson's "One Ordinary Day, With Peanuts," James Tiptree, Jr.'s "The Women Men Don't See," and Daniel Keyes' "Flowers for Algernon." These are some of the best and most famous stories our genres have ever produced. And my own "Mother Grasshopper" is among them!
So you'd think that nothing -- nothing! -- could possibly kill the pleasure I felt, right?
Man, you don't know editors.
Pictured above is the letter Gordon Van Gelder enclosed with the book. Read it and weep.

Pictured to the right is the cover of this still-extraordinary anthology. That little dot alongside it is my once-robust ego, rendered to scale.

[Whoops. I accidentally took in a couple of the blog's readers. My bad. Gordon was joking, as he frequently does. As indicated by the fact that Bester died in 1987. Though it would be great if he were still around.]
.
*
Posted by Michael Swanwick at 11:39 AM

You're sure this isn't a dummy copy and the real thing doesn't even include your story? [evil grin]

Nah. I always knew you'd get there. [raises a glass to ya]

To be absolutely straight about this, I'm sure that all the New Guys (Jeff, Ted, Me et al.) are not at all secure about our places in the Pantheon yet.

The iconic stories have stood the test of if not Time then decades. We'll see how good our own stories look twenty or thirty years from now.

This is just plain rude and, yes, well, stupid, to send it on a wrong address ...
It always amazes me how people who love and live for SF can be so close-minded.

Oh dear. GVG does know how to take the air out of one, doesn't he? Chin up. Some day someone shall receive such a letter about being included in a 'best of' with you and Ford and Ted. You shall no longer be a "New Guy" but an old fart.

Oi vei. You posters who think this letter of mine was serious, please know that this was a joke and I wouldn't have done it if I haven't been an admirer and sometime publisher of Michael's work since 1991 or '92 (GRIFFIN'S EGG). Alfred Bester has been dead since 1987 or '88. And as far as I know, he was extremely gracious and welcoming to newbie writers.

I did consider sending a followup joke letter to Michael in which I said I know how much he hates appearing in the same book with old farts like Bester and Sturgeon, and then asking him to tell me about the time he finally vanquished Dozois and stayed up later than Gardner at a convention, but I didn't get around to it.

As for your serious point, Michael, about how one's work will endure, try reading some of the BEST OF F&SF anthologies from the 1950s and '60s. I did in assembling this book and I found a lot of stories---beloved stories---that didn't hold up well for me. But they probably still kicked ass for other readers, so who can say what will last for another fifty years?

To be serious for an instant, I thought Gordon's letter was hilarious.

And I appreciated the fact that he very carefully chose a writer who's been dead for some time to address his letter to, so I wouldn't think for an instant it was serious. Writers being the thin-skinned and paranoid creatures that we are.

We totally need more stories about Alfred Bester throwing people out of airplanes.

"You've been Bested", he could say the moment before he throws them from the hatch. I predict a final epic confrontation with Cory Doctorow in his blog balloon.

Tension, apprehension,
And dissension have begun.

@GordonVG: not for one moment did I think it was a serious letter or I'd have been oh-poor-Michael, oh-dastardly-VanGelder solicitous, not piling on with a "dummy copy?" remark. Even if I'd not been aware Mr Bester had died, that letter was just too pointedly pricelessly misdirected to be real.

@Michael: You're right not to feel secure re: your place in the pantheon, most obviously because you're not the one to decide. I've long held that Literature (with a capital L) is that which survives, truly survives. (As opposed to a stray copy of it on papyrus, miraculously found by accident in an ancient Egyptian trash heap. After years of mourning the loss of the works of the great comedic writer Menander, the classics world rejoiced when substantial fragments of his work emerged in the first half of the 20th century. Imagine the disappointment when those works read like bad sitcoms ... )

But, and trust me I'm being honest here, I may not like everything you've ever written (nor do you, I daresay), but even in college you were a good, solid writer. I suspect your work will stick around for a considerable period. Assuming there's any justice in the world, and perceptive readers.