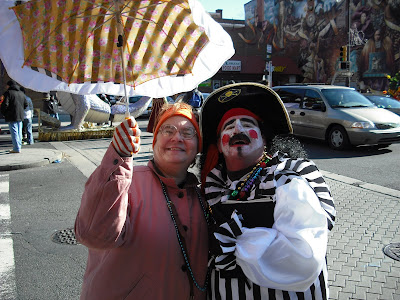 .
Elsewhere in the world, January 1 is New Year's Day.  Not in Philadelphia.  Here, it's known as Mummer's Day.  Because that's when the Mummers Parade takes place.  If you haven't seen it, you can't possibly understand it.  And if you've only seen it on TV, you haven't really seen it.
There's no way I can describe this event.  But I'll try.
The parade starts at 8 a.m.  and continues for hour after hour until well after the sun's gone down.  The Mummers start on Two Street and proceed up Broad Street to City Hall, where the final judging is.  There are three types of Mummers:  the Comics, the Fancies, and the String Bands.  They all march to extremely corny music.  They wear strange costumes, most notably the enormous ostrich-feathered "capes."  There are swarms of men with painted faces wearing a parody of Colonial female clothing, and these are called "wenches."  Each club picks a theme, such as "Down on the Farm" or "A Salute to Jews"  (you think I'm kidding), and they perform elaborate dance numbers with huge and gaudy -- but hand-pulled -- props and sets.  A significant number of them are drunk.
Are you confused yet?  Excellent.  That's a good beginning.
So imagine you've gone to see the parade for the first time.  It's probably cold.  The Mummers keep flowing past you in wave after wave of strangeness.  It goes on and on and on, like a river, elemental,  for hour after hour after hour.  If you're an intellectual, you keep trying to decode it, trying to figure out what it means, but of course you can't, because it's a primal experience, like fire or an avalanche -- simply there.  Eventually, you notice that some of the Mummers who've already finished the parade are strolling down the sidewalk, a can of beer in hand, still in costume and face-paint.  (Though they've taken off the capes.)  Then you realize that some of the people in the crowd are in costumes of their own devising so they can dance in the street in between bands.  Then that a lot of young women are wearing party hats and feather boas -- it's an old tradition in Philadelphia for young women to go cruising for young Mummers on January 1 -- and then that there are quite a lot of other people wearing funny hats or other pieces of other-the-top flash.  Then that even the folk who are normally dressed have flashes of color that may be their ordinary wear or may be there just for the day.
Then comes the sudden realization -- like that moment in Fellini's The Clowns when you twig that everybody in the movie, including Fellini himself, is a clown -- that there is no clear distinction between Mummer and non-Mummer, only degrees of Mummerishness, and that everybody, every human being on Earth is at least potentially a Mummer.
And it is in that instant that you achieve what in Philadelphia is as close to enlightenment as you are ever likely to get.
Above:  Marianne with a Mummer.  May she always be this happy.
And January 2 . . .
. . . is Isaac Asimov's birthday.  In honor of which, the redoubtable Tom Purdom has declared today National Write-a-Novel Day.
You have twenty-four hours.  Go!
*
Posted by Michael Swanwick at 12:59 PM

I'm usually good until someone pukes on my shoes, i.e. 1/2 hour.

The secret is to sleep late. If you hit Broad Street at noon, the Comics have all gone by already, and you've got the competitive Mummers -- the ones who are hoping to win first in category.

Not a lot of drunks in Fralinger, I'll tell you that. Or Quaker City either.

I won't claim I make it EVERY year, but they've never actually hit my shoes. It's a pagan ritual. Intoxication is integral.