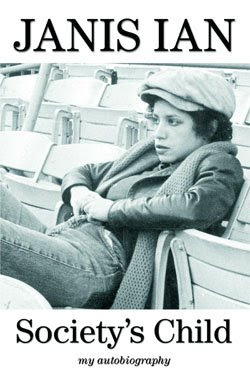 I've been reading Society's Child, Janis Ian's autobiography, because . . . well, because whenever somebody I know personally writes an autobiography, I read it.  And the short version is that if you have any interest at all in Janis Ian, then you want this book.
Janis was famous at thirteen and a has-been by seventeen.  She won Emmys.  She sold out Carnegie Hall.  She was good pals with Janis Joplin.  Racists hated her.  As a teen, she used to jam late into the night in small clubs with Jimi Hendrix.  So she's got that fantasy identification thing going on here.  But a lot of bad things happened to her as well.  There were times when I wanted to reach into the past and grab people and shake them.  For God's sake, what were they thinking?  She was only a child.
The book ends with the lyrics of her self-mocking song about writing an autobiography.   (You'd have to be formed by the ideals and nonsense of the Sixties to understand why this was necessary.)  But with all the ups and downs -- and it's a real roller coaster ride -- Janis really has led a fascinating life, and in Society's Child she manages to convey the essence of how it felt to her.
It does make me feel a little dowdy and ordinary reading it, though.  I can't help remembering the time, years ago, when Jack Dann told me how he felt after reading Thomas Mann's autobiography, wherein, Jack said, Mann was forever going to India to study under a famous guru or to Africa to meet somebody important.  "When I write my autobiography," Jack said glumly, "it's going to read:  'And then I went to Disclave.'"
Oh, and also . . .
There's quite a nice interview with Michael Andre-Druissi about his Lexicon Urthus at Ultan's Library, self-described as "a resource for the study of Gene Wolfe."  I recommend it.
And as always . . .
I've updated Poem du Jour.  This time it's a rather better poem by Carl Sandburg.
*
Posted by Michael Swanwick at 6:17 AM

I've been reading the gracious Mr. Purdom's book "The Barons of Behavior", quite possibly in some part because of it's lurid cover, but I'm so impressed that a book written in 1974 about "the future" (the year 2000) could have been written today. His predictions are prescient.