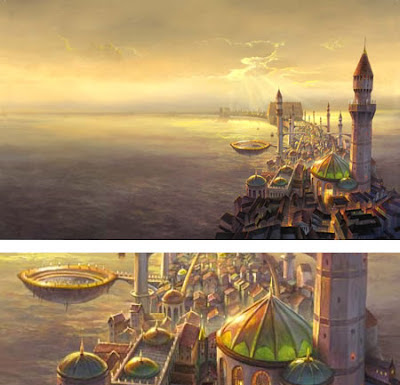 .
I went to Gregory Frost's reading at Philly Fantastic last Friday -- he was promoting Shadowbridge, which is why Thomas Thiemeyer's wonderful cover image is posted above -- and afterwards consulted with him about a story that had been giving me trouble. The story was "Libertarian Russia" (and, yes, I know that's a contradiction in terms -- it's a science fiction story), and the advice he gave me was, essentially, "Cut the first page."

Now, whenever I teach Clarion (West, South, or Classic Coke), I find the commonest error made by new writers is to start writing well before the story begins. Usually I can cut anywhere from one to eight pages right off the top. So it was a surprise to discover that, after more than a quarter-century as a published writer, I'd done it again.

Here's the opening I had to cut:

He left Moscow at dawn, rush hour traffic heavy around him and the sun a golden dazzle in the smog. American jazz saxophone played in his head, smooth and cool. Charlie Parker. He hunched low over his motorcycle and when a traffic cop gestured him to the shoulder with a languid wave of his white baton for a random ID check, Victor popped a wheelie and flipped him the finger. Then he opened up the throttle and slalomed away, back and forth across four lanes of madly honking traffic.

In the rearview mirror, he saw the cop glaring after him, taking a mental snapshot of his license plate. If he ever returned to Moscow, he’d be in a world of trouble. Every cop in the city – and Moscow had more flavors of cops than anywhere – would have his number and a good idea of what he looked like.

Fuck that. Victor was never coming back.

Outside the city, the roads got better as they passed through the gated communities where the rich huddled inside well-guarded architectural fantasies and then dwindled to neglect and disrepair before finally turning to dirt. That was when, laughing wildly, he tore off his helmet and flung it away, into the air, into the weeds, into the past . . .

He was home now. He was free.

He was in Libertarian Russia.


A lot of work went into that opening. It began with my last morning in Moscow and the drive to the airport with the sun in my eyes and jazz on the radio, incorporated observations I'd made there, and had a few hidden science fictiony bits that wouldn't become obvious until later in the story. I was very fond of that page.

Nevertheless, it had to go. That's the first lesson you learn as a writer: You have to be ruthless with your own prose.

I include it here because the thirty-fourth or -seventh lesson you learn it: Never waste anything.

There's no news yet. I'll let you know when there is.


And for those of you who listen to podcasts . . .


Paul Cole of WRFR radio is podcasting "A Small Room in Koboldtown" in two parts. The first half has been uploaded and can be found here.

I've heard that maxim as phrased as "Always eat your first-born", which makes me wonder if there are writers out there who aren't mammals, or maybe not even vertebrates.

Oh, God, I could tell you stories!

But I won't. I don't think there are any non-chordate writers out there, but there are DEFINITELY some reptiles.